Familiar duo no threat for Mweene 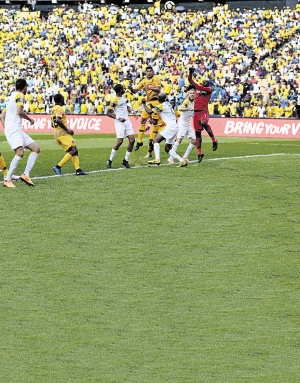 Since their arrival at Kaizer Chiefs, Khama Billiat and Leonardo Castro have not scored against Mamelodi Sundowns in a competitive game and goalkeeper Kennedy Mweene wants to keep it that way.

Billiat has faced his former team three times since leaving last year while Castro has made two appearances. In those competitive games neither has been able to find the net.

The only time the duo have found the net against Downs was in the 4-2 win in the recent Shell Helix Cup friendly in t where Castro grabbed a hat-trick and Billiat one.

They will be aiming to repeat that form in their league clash in Pretoria on Sunday.

"I'm ready for them," Mweene exclaimed. "They [Castro and Billiat] are different players because now they are playing for Chiefs. I can't just relax and think I know them. We still have to watch their games and know how they are now.

"But we have a game plan and we will apply it. We know how they play and we just have to be on top of our game, especially because it's our home game.

"It will be a tough game.. Whenever they play against us they do their best and I expect the same this weekend."

The 34-year-old is set to be between the sticks for Sundowns as Denis Onyango is in Uganda for a family bereavement while Reyaad Pieterse is injured.

Mweene says he is ready to hold down the fort. "As a keeper you always have to be ready to play when you are called upon. At Sundowns every player must be ready at any point to contribute," he said.

Kaizer Chiefs stars Leonardo Castro and Khama Billiat have a sent out a warning to their former employers Mamelodi Sundowns ahead of the ...
Sport
2 years ago

Friendly or no friendly‚ former Kaizer Chiefs defender Fabian McCarthy has said he was impressed and surprised by the manner in which Amakhosi blew ...
Sport
2 years ago
Next Article