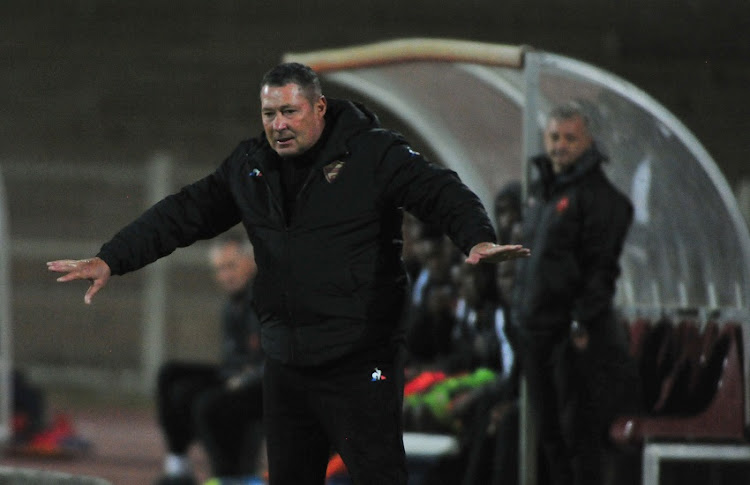 Stellenbosch FC coach Steve Barker says he sensed vulnerability in the Orlando Pirates ranks when the two clubs met last Saturday and he will be seeking to exploit that in their rematch in Cape Town this weekend.

The Premier Soccer League rookies host Pirates at the Cape Town Stadium on Saturday afternoon‚ just seven days after the two clubs met at the Orlando Stadium in Soweto in the first round of the Telkom Knockout.

There‚ Pirates dominated second string Stellenbosch team but only scored in the last 10 minutes to edge through to the quarter-final.

“You never want to lose a football match and we did lose at the weekend but in the loss I got a sense that Pirates have lost an aura‚” explained Barker in the build-up to the league game.

“In years past there were teams that you almost felt were invincible‚ that you could not get anything from them.

“But this Pirates is a team that if you play well‚ and if you do create and take your chances‚ you can put them under enough pressure to win the game.

“They are under pressure‚ they are not in a comfortable position in the league‚ particularly for their ambitions as a big club‚” he added‚ turning up the heat.

“It was always going to be pressure for them playing us twice in two weeks. The expectation from their fans was that they’d win both games comfortably.

“We are not in the most comfortable position either‚ so it’s a game that both teams desperately want to win.”

Pirates are eight in the standings and Stellenbosch in 14th placed‚ after winning only one of their opening eight league games. But only two points separates them.

“And what better story for Stellenbosch FC than to say after nine matches we are above Orlando Pirates in the league‚” Barker said.

“But it’s about concentrating on what we need to do. We have a long mission ahead of us‚ another 22 games to play in this league to ensure we get the points we need to achieve what we want to achieve and this weekend is just another stepping stone in that direction.”