Pitso Mosimane: 'I don’t buy that story that they have financial challenges' 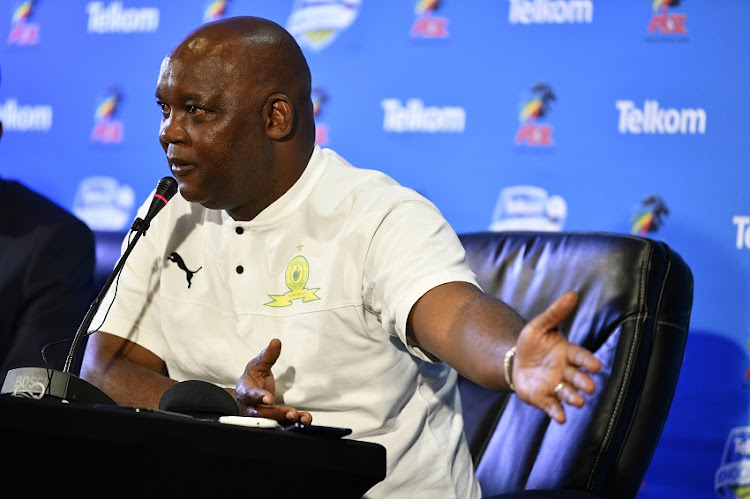 Pitso Mosimane has set a target of Mamelodi Sundowns winning Group C in the 2019-20 Caf Champions League to avoid a continental giant in the quarterfinals.

Mosimane identified USM Alger (Algeria) and Downs’ nemesis in recent Champions League (ACL) campaigns‚ Wydad Casablanca (Morocco)‚ as the tough opponents in the group due to their pedigree and the hostility of crowds in North Africa.

He did not downplay the threat of Angola’s Petro de Luanda.

Mosimane recalled traveling to play USM in Algiers as coach of SuperSport United in the 2004 ACL group stage‚ losing 2-1.

“The last time I went to Algiers to play USM‚ Kaitano [Tembo‚ now coach of SuperSport] was still playing for my team. We lost narrowly. But that was moons ago.

“I don’t buy that story that they have [financial] challenges. Until Caf confirms it [USM have threatened to withdraw] then that story doesn’t happen.

“We’ve been in that space. We’ve played those clubs. We know the mood‚ the lasers‚ mentality‚ the hostility.

“The last time we were in Algeria we nearly didn’t finish the match against ES Setif [in 2016]‚ and we were taken out of the pitch by police.

“The flares‚ the noise‚ the referee under pressure‚ the players in the referee’s face at half time. Decisions might go against you; not because the referee is cheating‚ but because of pressure.

“We have never been to Angola. Petro always win their league‚ they’re always in the Champions League. The year before last an Angolan team [Primeiro de Agosto] were in the semifinals.

“We only failed to score one goal at home‚ or we could have gone to the final. They are not comfortable against us‚ because 1-0 at some stage has to turn around.

“So it’s important to be top of your group. Last year we wanted to finish top to avoid Al Ahly‚ but it was a different story with them in the quarterfinals [Sundowns won 5-1 on aggregate].

“So the boys know the problem. It’s how we perform. Win home [in the group phase]‚ try and win one game away.”

Sundowns begin their Group C campaign against Petro in Pretoria at the end of November.