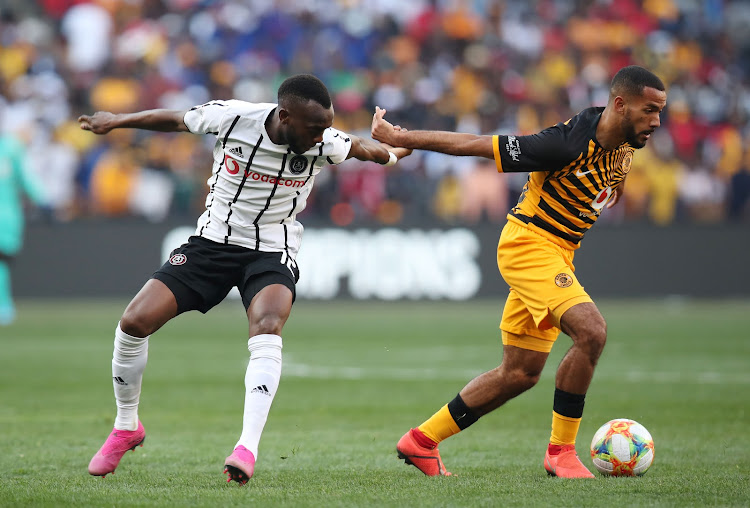 Reeve Frosler and Justin Shonga will battle it out when the two giants lock horns.
Image: Muzi Ntombela/BackpagePix

This encounter will be the highlight of the quarterfinal of this competition where the dates and venues are to be confirmed by the Premier Soccer League (PSL) at a later stage.

In other matches, SuperSport United were drawn against Lamontville Golden Arrows, Mamelodi Sundowns will be away to Chippa United while Maritzburg United will host Highlands Park.

Before the draw, Chippa booked the last place in quarters with a hard fought 1-0 win over Bloemfontein Celtic at Sisa Dukashe Stadium in Mdantsane.

This victory marked the first win of the season for Chippa in all competitions and for new coach Norman Mapeza.

The only goal of the match was scored by substitute midfielder Lehlogonolo Masalesa who beat Celtic goalkeeper Jackson Mabokgwane with a towering close range header after 78 minutes.

The first half did not produce many attacking chances with the notable exception of Celtic’s Ndumiso Mabena and Lucky Baloyi who tested United’s goalkeeper Patrick Tignyemb.

For the hosts, Thabo Rakhale and Rhulani Manzini threatened but their attacks were not dangerous to trouble Mabokgwane who was equal to the task.

The other highlights of the first half were the forced injury substitutions of Andile Mbenyane and Tshepo Rikhotso of Chippa and Celtic respectively.

Mbenyane was the first to depart midway through the first half as he did not respond to treatment on the field for what looked like a hamstring injury and he was replaced by Masalesa.

Rikhotso left the field minutes later to be replaced by Thato Lingwati after he fell awkwardly on his shoulder while competing for the ball with Mzikayise Mashaba.

The goal finally arrived in the 78th minute when Masalesa rose above everyone in the box to head home Tercious Malepe’s well-taken corner kick.

Mamelodi Sundowns had the title-winning trio of Leonardo Castro‚ Khama Billiat and Keagan Dolly – the ‘CBD’ - that led them to title success and ...
Sport
2 years ago
Next Article