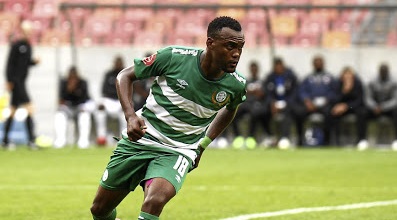 Given Mashikinya of Bloemfontein Celtic believes his team has what it takes to beat Chippa United in the TKO clash tonight.
Image: Michael Sheehan / Gallo Images

Bloemfontein Celtic midfielder Given Mashikinya has praised the club's chairman Max Tshabalala for re-stabilising the team, confirming there've been no cases of non-payment of salaries thus far this term.

Last season, Tshabalala and his players found themselves at loggerheads, prompting the playing personnel to down tools several times because of the club's failure to pay them salaries and bonuses.

According to Mashikinya, things have changed for the better this season. The 28-year-old midfielder has commended Tshabalala for the new-found stability, saying no one in the club is owed money by the hierarchy at the moment.

"I need to give credit to the owner of the club Mr Tshabalala. He pulled through, after all the difficulties. Now everything is okay," Mashikinya told Sowetan.

"The phase of hardship has passed, we're in the new phase now and everything is okay. We are getting paid on time and everyone is happy at the club. there's no repeat of last season whatsoever."

Surprise Ralani engineered a remarkable second half comeback for Cape Town City with two goals in the space of as many minutes as the home team ...
Sport
3 years ago

It remains to be seen if Celtic will maintain their new financial strength until the end of the season as it is believed that Tshabalala balanced his books through the money gained from the sales of Tshegofatso Mabasa, Kabelo Dlamini and Bongani Sam to Orlando Pirates before the start of this season.

Meanwhile, Phunya Sele Sele take on Chippa United for the last spot in the last eight of the Telkom Knockout at Sisa Dukashe Stadium tonight (7.30pm).

Going into this TKO encounter, Mashikinya is nostalgic about losing the same tournament's final 1-0 to Bidvest Wits in Durban in 2017.

"Two seasons ago, we lost the final so this time around we must make sure we go all the way and win it for the Siwelele faithful. As much as we would have loved to play at home against Chippa, we can still beat them away," said Mashikinya.

"We can definitely win the TKO because we have a bunch of good players; a number of us have that experience of playing in a final. On the other hand, our youngsters have hunger to achieve greater things."

Wits continue to improve with slender win over Celtic

Bidvest Wits love any three points they can get right now, no matter how they come by them, and a scrappy 1-0 Absa Premiership victory against a ...
Sport
4 years ago

Bloemfontein Celtic coach Veselin Jelusic hopes that the positive approach of his side to their Telkom Knockout first round clash with cup kings ...
Sport
4 years ago

Lebogang Manyama netted 15 minutes from time to catapult Cape Town City to the top of the Premier League table with a 3-2 victory over Maritzburg ...
Sport
5 years ago
Next Article