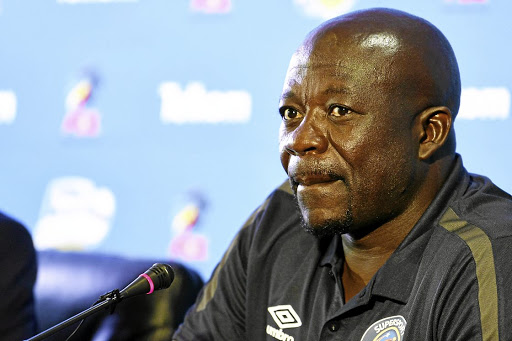 This after they advanced to the quarterfinals of the Telkom Knockout, having clinched the MTN8 trophy earlier this month.

They edged Baroka 3-2 in a penalty shootout in the first round of the TKO on Saturday after grabbing a late equaliser to draw 1-1 in regulation time.

It was a lucky escape with the free-scoring Bradley Grobler scored in injury time after Mduduzi Mdantsane had put Bakgaga ahead in the 59th minute.

"The win is a true reflection of our mental strength and toughness. We knew it would not be any easy game against the champions," United coach Kaitano Tembo said.

"We scored right at the death and that shows how strong we are mentally. In the penalties we missed our first two but didn't drop our heads."

Coach Kaitano Tembo gets SuperSport focused on another cup

SuperSport United coach Kaitano Tembo wants his players to forget about MTN8 success and turn their attention to the Telkom Knockout‚ which starts ...
Sport
2 years ago

With the possibility of winning a cup double before the end of the year a reality, Tembo insists that they are not getting overexcited.

"It's one game at a time for us. We will just have to wait to see who we play against in the next round. Our focus now is on our next game against Black Leopards [on Friday] and we don't want to look too far ahead of ourselves."

Baroka coach Wedson Nyirenda was beside himself with anger after the loss. The club had hoped to put on a solid title defence of the R4m cup they lifted last year in Port Elizabeth.

"We planned to win the match in 90 minutes, which is what we did. There is nothing more to say," he said in a reference to the Grobler equaliser.

"It's very painful, especially the way we lost it."