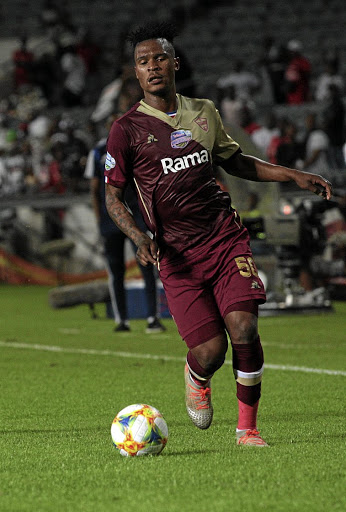 Nkanyiso Zungu has come into his own with Stellenbosch.
Image: Veli Nhlapo

These are the words uttered by Stellenbosch coach Steve Barker to explain how he's managed to keep talented midfielder Nkanyiso Zungu focused, having been deemed a bad boy for his off-field
behaviour at his previous clubs AmaZulu and Jomo Cosmos.

Zungu put in a solid performance in the middle of the park in Stellenbosch's 1-0 Telkom Knockout first-round defeat at Orlando Stadium against Orlando Pirates at the weekend.

Thembinkosi Lorch netted the only goal of the match to eliminate the Capetonians.

While many had thought Zungu's career was over when he left AmaZulu in June last year, having hogged the headlines for ill-discipline, the 23-year-old midfielder proved his critics wrong by re-establishing himself at Stellies.

"I think there's not much to say about it [Zungu's rejuvenation]. Guidance, care, love and talented players have talent because they're born with that talent," said Barker of Zungu, who's in his second season with the club.

"Nkanyiso is hard-working, he's dedicated, he's committed and he just needs love and care at the right time. He's young, he's growing up."

Barker feels living in a tranquil Stellenbosch area has also played a role in Zungu getting his act together. The Stellenbosch coach is the one who handed Zungu his top-flight debut at AmaZulu in December 2015.

"I encourage that players have a good, balanced life. The environment in Stellenbosch is conducive for that. We're pleased for him and the maturity that he's showing," said the Stellies mentor.

"When I first worked with him at AmaZulu and gave him his professional debut, he was still at school. It's not easy when you're young - 17, 18 years old - and you have pressure everyday of performing, you're earning money."

Stellies hope for revenge when they host Pirates in a league tie at Cape Town
Stadium on Saturday (3pm).