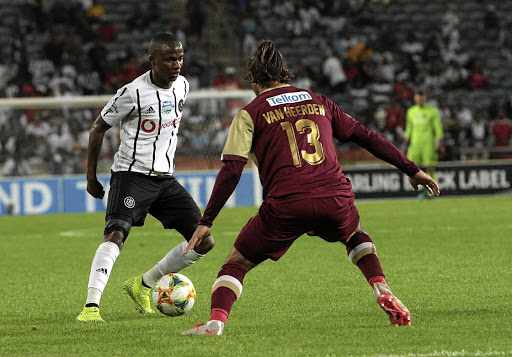 Thembinkosi Lorch of Orlando Pirates, left, tries to weave his way past Marc van Heerden of Stellenbosch during Saturday's Telkom Knockout first round, which Bucs won 1-0, thanks to Lorch's goal.
Image: Veli Nhlapo

In a match where it appeared like their defensive crisis was a thing of the past, a new epidemic of missing glorious chances gripped Orlando Pirates in Saturday's 1-0 home success over Stellenbosch.

It was Thembinkosi Lorch's 84th-minute strike that saw Pirates edge rookies Stellenbosch in the first round of the Telkom Knockout at Orlando Stadium. It was Lorch's maiden goal of the season.

Prior to the Stellies encounter, the Sea Robbers had netted eight goals and conceded the same amount in three games, meaning their rearguard was an impediment, while their attack was on fire.

However, their bluntness in front of goal reared its ugly head over the weekend.

Even so, Bucs tactician Rulani Mokwena stood by his misfiring attackers, maintaining they gave their all. The Bucs mentor, however, vowed to address the problem by making his troops train more in the aspect of scoring.

Orlando Pirates coach Rulani Mokwena has admitted that their trophy drought of the past few years has been long enough and he wants to make the ...
Sport
2 years ago

"We'll go back and practice more and more and keep improving the team. I don't know any other answer to solve that [goalscoring] problem except to continue working even harder."

The Pirates coach was also pleased about not conceding.

"We're creating the chances, but today everyone has been talking about us conceding goals. Can we congratulate the team for keeping the clean sheet? They've scored nine goals in the last couple of games and it wasn't enough, today they missed an avalanche of chances, but we won."

Pirates and Stellenbosch clash again in a league match at Cape Town Stadium on Saturday (3pm).

"First things first, I think for us is to go back and analyse this match and try to work hard on some of the things that we picked up from this match," noted Mokwena.

"To think about next week now is a bit premature and we don't want to put the cart before the horse."