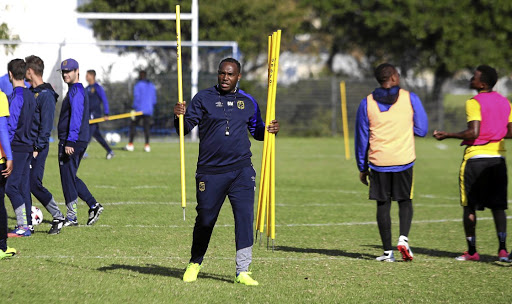 Cape Town City coach Benni McCarthy is‚ so far‚ the only coach to publicly agree a release of a player to the SA Under-23 for their Africa Cup of Nations tournament in Egypt next month.
Image: Esa Alexander

The SA Football Association (Safa) are hopeful that the squad for the Under-23 Africa Cup of Nations in Egypt next month will be at full strength despite the start and finish of the tournament being played outside of a Fifa international window.

Earlier some clubs‚ with Ajax Cape Town and SuperSport United saying so publicly‚ were refusing to release players for the tournament‚ which kicks off on Friday November 7 – three days before the next Fifa international window‚ which is from November 11 to 19.

The Under-23 Africa Cup of Nations‚ where South Africa are drawn with Cote d’Ivoire‚ Nigeria and Zambia‚ runs from November 7 to 22 with the top three finishers going to the Olympic Games in Tokyo next year.

Paul‚ however‚ says Safa are not seeking the postponement of both Absa Premiership and GladAfrica Championship matches on the weekend of November 7-9‚ but rather that clubs release players called up.

SA Under-23 coach David Notoane has also been talking to club coaches and privately officials say they are confident of cooperation‚ except for one or two struggling clubs.

Cape Town City coach Benni McCarthy this week slammed those who would refuse to allow players to go to the tournament‚ which serves as a qualifier for next year’s Olympic Games‚ in a boost to Notoane’s hopes.

“You cannot stand in a player’s way. It’s a platform for them‚” McCarthy said.

“If you don’t let him [a player] go and the team qualifies for the Olympics and then he doesn’t go to the Olympics‚ I don’t think you can do that to him.”

McCarthy will be letting defender Keanu Cupido participate in Egypt. He is‚ so far‚ the only coach to publicly agree a release of a player.

Other clubs likely to be affected are Bloemfontein Celtic‚ Chippa United‚ Kaizer Chiefs‚ Orlando Pirates‚ SuperSport and champions Mamelodi Sundowns in the PSL‚ and Ajax, Richards Bay‚ Swallows FC and University of Pretoria in the GladAfrica.

The nation's soccer lovers set aside their rivalries to celebrate the birthday and legacy of Kaizer Motaung after the Kaizer Chiefs boss turned 75 on ...
Sport
2 years ago