Coach Kaitano Tembo gets SuperSport focused on another cup 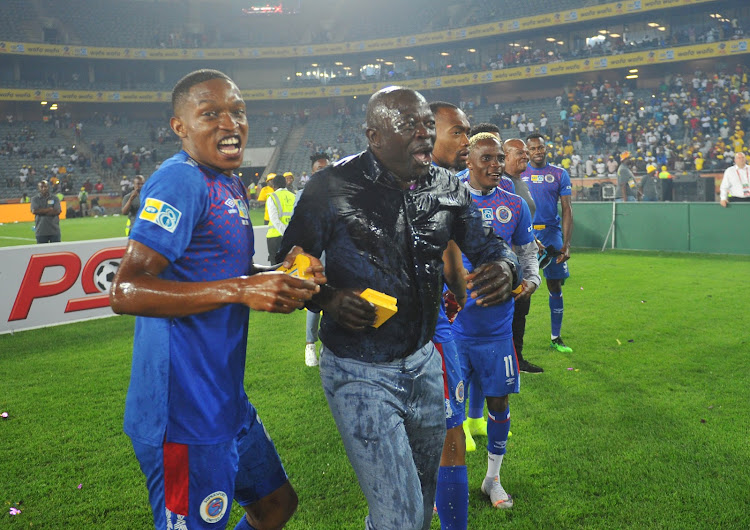 Kaitano Tembo's challenge is to get his SuperSport United players in the right frame of mind and grounded after winning the MTN8 cup last week.
Image: Sydney Mahlangu/ BackpagePix

SuperSport United coach Kaitano Tembo wants his players to forget about MTN8 success and turn their attention to the Telkom Knockout‚ which starts with a tricky clash against defending champions Baroka FC.

United host Baroka at the Lucas Moripe Stadium in Atteridgeville on Saturday night where Tembo is expecting a changed mindset from his troops because there is still a lot to play for this season.

“We have had enough time to recover‚ move on from our MTN8 victory and make sure that the players are in the right frame of mind‚” he said.

“You can see how quickly football moves but we had the opportunity of changing the mindset of the players.

"We are not focused on talking about our success‚ what is important for us is the next game.

“We have already put the MTN8 behind us and all the players are raring to go.

"They can see that there is another opportunity to put ourselves in a situation where we can be crowned champions again in another tournament.

“The last time we won this tournament was in 2014 and it has been quite a long time.”

After the MTN8 tournament‚ Tembo rewarded his players with a short break that was coupled with the Fifa international window‚ but they are back at full training.

“After the MTN8‚ we gave them a couple of days off because they deserved it‚ but we came back straight into full training.

“When they returned‚ we arranged friendly games for players who have not been playing regularly to get some match fitness‚” he said‚ adding he has enough experience in his team to be able to deal with the disruptions of the international break.

“The spine of the team is very experienced‚ they have been in these situations before and they will be able to guide the young ones.

"What is key for us is consistency because you are always as good as your last game and that is what we always preach to the players.

“We have a little bit of disruption in terms of not having all our players around because three of them were away with Bafana Bafana against Mali and two players with the Under-23s in Egypt.

“That disrupted us a little bit and the first training session was this morning [Thursday]‚ and we have only two days to really prepare and those are the five most important players in our team.”

What Markram can learn from Elgar

Clearly‚ Dean Elgar and Aiden Markram aren’t saying much to each other besides‚ “Yes!”‚ “No!”‚ “Wait!” and‚ considering how South Africa’s men’s Test ...
Sport
2 years ago

Cricket SA (CSA) have disputed the Western Province Cricket Association’s (WPCA) claim that they are in breach of the memorandum of incorporation ...
Sport
2 years ago
Next Article