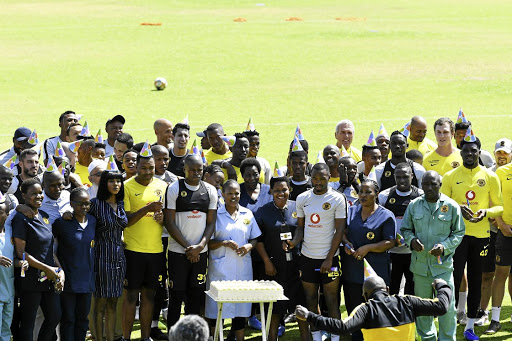 Party hats and anniversary horns were the order of the day at the Kaizer Chiefs base in Naturena yesterday as the club celebrated the 75th birthday of their chairman and founder Kaizer Motaung.

Motaung's cake may have been eaten yesterday but the club's star, Khama Billiat, still craves more celebratory moments to honour the Amakhosi owner, who formed the club when he was only 26 years old.

Billiat feels a win against Cape Town at Cape Town Stadium [3pm] in the first round of the Telkom Knockout on Saturday would be a perfect birthday present for Motaung.

"He he has to finish this week very happy and we will do our best," said Billiat at Chiefs' media open day at their village yesterday.

Having gone four straight seasons without a cup, the TKO, their first cup tournament this term, gives Chiefs another shot at glory. Top-of-the-table Chiefs did not participate in the MTN8 after finishing ninth the past season.

Kaizer Chiefs' players‚ technical team and staff of their Village in Naturena sang Happy Birthday to Kaizer Motaung on Wednesday‚ in celebration of ...
Sport
2 years ago

While Billiat reckons it's a matter of time before they end their long trophy drought, he has urged his team mates to work even harder.

"I feel like we are getting closer to winning a trophy but we have to work for it, it won't come just like that. Everyone needs to think the same way," said Billiat. "We look like we are getting to understand what we need [to win trophies] this time around."

Billiat also pleaded ignorance to suspicions that he was not on good terms with his coach, Ernst Middendorp. The Chiefs coach didn't take kindly to the player's decision to play for his country while he was carrying a slight injury last month.

"I don't know that. Just now I was greeting him, I don't know where this is coming from," noted Billiat. "Come on, I am working with the coach every day. This is the first time I am hearing about it."