Stellies out to exploit Bucs' poor form in TKO 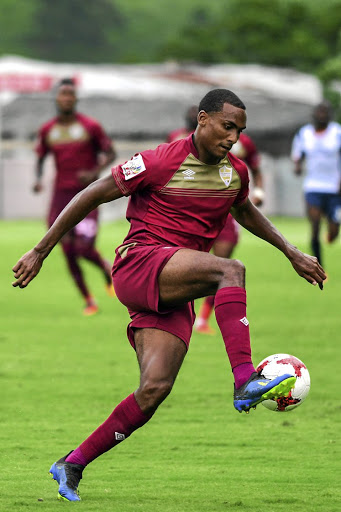 Mogamad Rafiq de Goede says they want to show Pirates that they are not in the big league by fluke.
Image: Darren Stewart/Gallo Images

Stellenbosch defender Rafiq de Goede sees no reason they can't beat Orlando Pirates in the first round of the Telkom Knockout.

In what will be their first ever top-flight cup competition tie, rookies Stellenbosch face an indifferent Pirates side in the last 16 of the TKO at Orlando Stadium on Saturday (6pm). The two sides also meet in a league clash at Cape Town Stadium the following Saturday.

"For us as newcomers, there'll be no pressure on us. But we will go all out and give our best. We have every reason to believe that we can beat Pirates.

"I don't see why we cannot beat them, especially with their latest form," the 26-year-old De Goede said.

"We want to show that we are not in the big league by fluke. We are up for any challenge.

"Playing in a big competition like the Telkom Knockout is a big challenge."

The Stellies centre-back expects the Sea Robbers to utilise different approaches for the two fixtures. Stellenbosch picked up their first win of the season after beating Polokwane City
2-0 away two weeks ago.

"It's interesting that after playing them in the cup [the TKO] we are hosting them in the league. They might change the team in the second game because they have a big squad," said De Goede.

As newbies, one would predict cup competitions to be peripheral to the Capetonians, prioritising safety in the league, but according to De Goede, that's not the case.

"On our side both games [against Pirates] carry the same weight. We cannot say we put the league first each and every competitive game we play, it's a battle for us."