'Time for cup victory for Amakhosi' 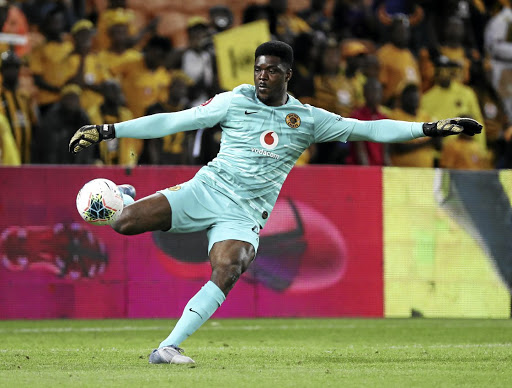 Having been on fire in the league, the Telkom Knockout could either have arrived at an opportune moment or prove disruptive to Kaizer Chiefs' brilliant Absa Premiership form.

As they missed out of the recently-concluded MTN8 by virtue of finishing ninth the previous campaign, Chiefs' cup credentials will be put to a test for the first time this season when they travel to Cape Town City in the first round of the Telkom Knockout, kicking off next weekend.

Goalkeeper Daniel Akpeyi, who's played a pivotal role in Chiefs cruising to the summit of the log, doesn't think the Knockout can derail their early charge to the league title.

"It's time to win something, starting with the Telkom [Knockout]... even starting from the weekend game [the Shell Helix Cup against Mamelodi Sundowns at FNB Stadium]. It's very important because every win motivates you to the next one," said Akpeyi on the sidelines of the TKO draw in SuperSport studios in Randburg yesterday.

Kaizer Chiefs goalkeeper Daniel Akpeyi's string of great saves against Baroka FC a few days ago helped his side to win the match but the player ...
Sport
2 years ago

Akpeyi pins his hopes, of challenging for every trophy on offer, on Amakhosi's resolve. Chiefs have gone four straight terms without silverware; this also pushes the troops at Naturena, according to the Nigerian international.

"We are a professional side. I am sure we are one of the most professional sides in Africa and in the world, so we should be prepared to compete in each and every cup on offer. the Telkom, Nedbank. whatever.

"We always feel that [the pressure of going four full seasons without a trophy], I think it's that that's been pushing us to actually go all out and do well this season. maybe two, three trophies, I see no reason why we cannot we all of them."