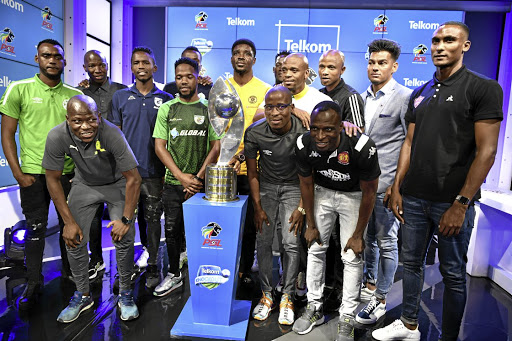 Players from different PSL teams pose with the Telkom Knockout trophy during the launch of this year's edition in Randburg yesterday. The competition kicks off next weekend. / Lefty Shivambu/Gallo Images

Bullish Baroka feel that their current squad is better than the one from last season as the club begin their ambitious journey to defend the Telkom Knockout title.

The club from Ga-Mphahlele in Limpopo will begin their TKO defence away against SuperSport United next weekend.

After shocking the football fraternity last season by clinching the R4m cup, Bakgaga believe they can prove their doubters wrong again by successfully defending the trophy.

"I think we have a stronger team, but we are in the process of building. We need to infuse two or three players into the team so that we have more competition and more impetus," coach Wedson Nyirenda said.

"It is not going to be easy but we want to defend it, definitely. It would be interesting to have us in the final again. We are going all out for it, so we will see what happens."

In that famous final in Port Elizabeth last year, Bakgaga stunned a confident Orlando Pirates to hoist the trophy after a 3-2 penalty shootout win (2-2 in regulation time).

The man who lifted the cup, skipper Mduduzi Mdantsane, is eager to relive that winning feeling again.

Nyirenda to fight to death
Sport
2 years ago

"Obviously, we would like to win this cup again this year. As a club we achieved an incredible thing last year by winning it and why not again?

"As a team we have matured and we are stronger than last season. In the off-season we signed some good players and we are better than the cup winning team."

The last team to successfully defend the TKO was Kaizer Chiefs in 2010.

Meanwhile, Mamelodi Sundowns have been drawn to face AmaZulu at home in Pretoria. After giving their all and falling short in the MTN8, Downs skipper Hlompho Kekana says his team is looking forward to reaching their first final in almost four years.

"Definitely, we will give this cup a go and try to win it. It was disappointing not to make it to the MTN8 final but now this TKO gives us a chance to redeem ourselves," he said.