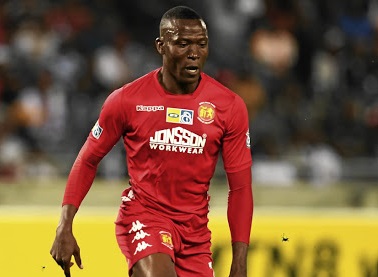 Highlands Park striker Tendai Ndoro had long been dreaming about teaming-up with either Reneilwe Letsholonyane or retired midfielder Teko Modise.

While his desire to play with Modise in a competitive environment will not be realised as the ex-Bafana Bafana star has hung up his boots, Ndoro was on cloud nine after linking-up with Letsholonyane at Highlands Park.

"When I was still playing in Zimbabwe [for Chicken Inn], I had a dream to play in the same team as Letsholonyane or Modise. I consider both of them as the best players in SA," said Ndoro.

"I was very excited when Yeye [Letsholonyane] joined Highlands a few weeks ago . it's a dream come true. I believe that he will help me score a lot of goals. He's got football brains and I think we can form a solid partnership."

Ndoro and Letsholonyane were introduced in the second half of the MTN8 final against SuperSport United at Orlando Stadium on Saturday. Matsatsantsa dispatched Highlands Park 1-0 to lift the trophy.

"This game has taught us so much. The feeling of losing is not okay, but now that we've tasted it we will work harder to win in the future," Ndoro said.

"Most of our players were playing in the final for the very first time, so it was a right time for them to learn."

The 34-year-old striker was confident that their MTN8 disappointment won't have a disastrous sequel to their league campaign.

"We will try by all means to forget about this MTN8 final as quick as possible. I am positive that we will put it behind us and focus on the league going forward," said Ndoro.