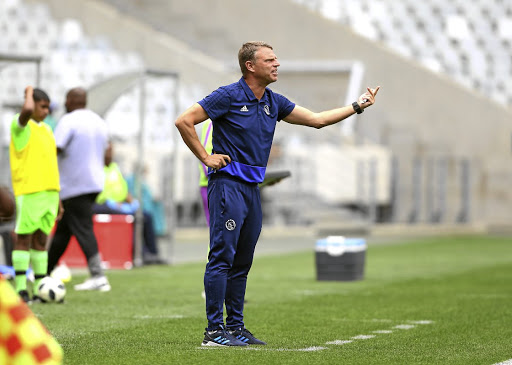 Ajax Cape Town coach Andries Ulderink is of the view that they can clinch promotion only if they can improve their away record.

Second-placed Ajax may have just played twice away so far, but the fact that a win eluded them in both encounters against Mbombela United (draw) and TS Galaxy (loss) gives Ulderink sleepless nights.

"For me at the moment it's difficult to predict if we can do better in away games. I can give you an answer after the [current] international break," said Ulderink.

"We must be realistic, I think we can do it [gaining promotion] only if we can play better away from home."

The Dutch-born mentor trusts the arrival of new striker Mohau Mokate, who joined the Urban Warriors last week after partying ways with Maritzburg United, will also play a huge role in the club's push for promotion.

Ajax Cape Town moved to within a point of leaders Stellenbosch FC as the race for the automatic promotion place in the National First Division ...
Sport
3 years ago

"I think in certain areas we were vulnerable, that's why we brought in Mokate . we were thin in that top No.9 position. I want a certain style of playing and I think Mokate will add value and help the club fight for championship."

Ulderink, who replaced Muhsin Ertugral in November last year, also shed light on why he substituted reliable centre-back Thendo Mukumela at half-time in their Friday's 2-1 home win over Steenberg.

"I need to speak to Thendo. It's three games in a row that he's losing his run inside the box, the one-versus-one battles ... With his quality, I expect more from him."

Ajax's next fixture is away to fellow former top-flight side Moroka Swallows at Dobsonville Stadium on October 19. The Capetonians will head into the battle with the Dube Birds high in morale, having won two games on the trot, against Royal Eagles and Steenberg respectively.

Five things you need to know about the MTN8 final

SuperSport United players will troop onto the Orlando Stadium pitch as favourites when they face Highlands Park in the MTN8 final on Saturday night.
Sport
2 years ago

Having been shipped out to GladAfrica side Royal Eagles on loan by AmaZulu, striker Somila Ntsundwana has admitted the decision to loan him out to ...
Sport
2 years ago