Namibian sensation Helalia Johannes shone with another sensational performance to win the Joburg leg of the SPAR Women’s 10km Challenge at Marks Park Sports Club in the record time of 33.16 minutes on Sunday.

It was her sixth consecutive record-breaking win in the Grand Prix series and it came just over a week after she bagged a bronze medal in the women’s marathon at the World Athletics Championships in Doha.

Comrades Marathon winner Gerda Steyn was second in time 34.28 and last year’s Joburg winner Irvette can Zyl finished third in 34.40 in what was a top three clean sweep by runners representing Nedbank.

As in the previous Women’s Challenge races this season‚ Johannes went out fast and led from start to finish with a bunch that included Steyn‚ Van Zyl‚ Ethiopian junior Tadu Nare and Glenrose Xaba.

After the race‚ Johannes said it was difficult to recover from the World Championships in Doha and still win in Johannesburg.

“I prepared very well for the marathon and I think that I was able to do well here because I really am super-fit. I am very happy to have won again‚” she said. 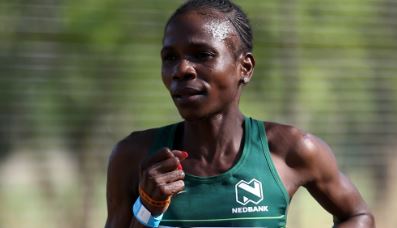 “She earned the maximum points in each race‚ earning bonus points every time and taking the other runners with her. No-one has been this dominant in the Grand Prix before‚” said Laxton.

Steyn‚ who is preparing for the New York marathon on November 6‚ said she used the race to work on her speed for New York.

“It’s a great way to prepare. I knew that the second half of the race was uphill so I stuck as close as I could to the leaders on the downhill‚ because my strength is in my stamina and endurance. I always do well on the hills. The Challenge races are great‚ I love taking part in a women’s race‚” said Steyn.

Van Zyl‚ who underwent surgery for an ongoing neural problem in her groin earlier this year‚ said she had had a rollercoaster year and was very pleased to have finished on the podium in the race she won last year.

“My next goal is the Soweto Marathon on November 3 where I am hoping to win for the third time. It’s been a tough year but I hope I will be in better shape then‚” said Van Zyl.