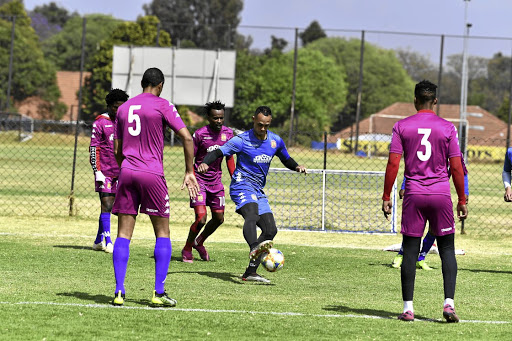 Highlands Park goalkeeper Thela Ngobeni hopes the MTN8 final against SuperSport United does not go to penalties, with a foreboding that his counterpart Ronwen Williams will outshine him.

At Orlando Stadium on Saturday (6pm), Highlands will be looking to clinch their first-ever cup in the new era at the expense of SuperSport, who aim to win their second Wafa Wafa title in three years.

"Talking about Ronwen, I think he's a top keeper. He's currently number 1 in the country. I have so much respect for him. But I will try to help my team," said Ngobeni.

"If it comes to penalties, we all know that Ronwen saves penalties left and right. He's far better than most of us. Hopefully it does not go to penalties because it's going to be difficult for us, especially with Ronwen in goal."

After 180 minutes without a goal scored, substitute Mokete Mogaila slotted the decisive kick in the lottery of the penalty shootout and Highlands ...
Sport
2 years ago

SuperSport clinched the MTN8 in 2017 before losing to Cape Town City on penalties in last year's edition. Perhaps playing mind games, Ngobeni feels appearing in the past two MTN8 finals makes Matsatsantsa the favourites this time.

"That's for sure [that SuperSport have the upper hand over Highlands]. For them to be playing the MTN8 final three times in a row is special and that should be motivation for them," noted Ngobeni

It may be Highlands' first cup final in recent memory, but for Ngobeni, 30, playing in the decider isn't new because he won the Nedbank Cup with Free State last year.

"It's my second cup final in a short space of time. I'm not going to think about my past achievements; I'm faced with a new challenge."
Ngobeni said.

Nurkovic wastes no time to shine.
Sport
2 years ago

Polokwane City and Highlands Park produced one of the dullest displays this season when they played to goalless in the first leg of MTN8 semifinal at ...
Sport
2 years ago
Next Article