Benni McCarthy and the money man on the same page 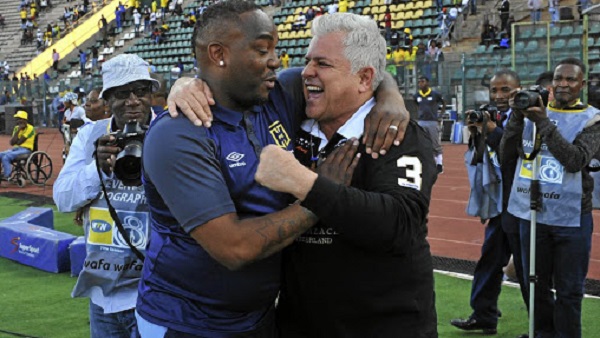 Cape Town City boss John Comitis, right, has played down talk that he and his coach Benni McCarthy do not see eye to eye after a couple of failed signings.
Image: Sydney Mahlangu / BackpagePix

Cape Town City boss John Comitis says there is no simmering tension between himself and Benni McCarthy with the outspoken coach having voiced displeasure over recent transfer decisions.

On more than one occasion McCarthy has expressed annoyance after the club failed to make two signings he wanted.

Last month, the City coach appeared to take a dig at Comitis on live TV after the club failed to sign defender Robyn Johannes. The City defence was leaking goals and McCarthy was eager to reinforce with the veteran defender before he was snapped by Stellenbosch FC.

Two weeks ago, McCarthy was again at it when he criticised the club for not signing Mark Mayambela who was training with the team.

Benni McCarthy’s irritation with his club’s signing policy spilled over again on Wednesday.
Sport
2 years ago

When asked about the lack of signings, he said: "Ask the money man."

Though some may feel that their relationship is strained, Comitis insists that all is well between them.

"Me and Benni go a long way. I know how he speaks and can make a comment tongue in cheek, but then the media take that and sensationalise it," said Comitis.

"Everything Benni has said we have already spoken about in our technical meetings. He knows the reasons why we couldn't sign Johannes and he understands it," he said.

Comitis explained that the reason Johannes was not signed was because the defender wanted a two-year deal.

"The quick fix was to get Robyn here, but he wanted a two-year contract, at his age we weren't willing to do that."

The Citizens are blowing hot and cold this season and have dropped points in games they dominated. This weekend they relinquished a two-goal lead to draw 3-3 with Orlando Pirates.

"It's frustrating to lose games we should have won," said Comitis.

A decision on whether Cape Town City will sign Mark Mayambela will be made by Monday after coach Benni McCarthy‚ who wants to add the player to his ...
Sport
2 years ago

Cape Town City’s defensive hardman Taariq Fielies is making a much faster than expected recovery from stomach surgery and went back to training at ...
Sport
2 years ago

The disagreement between Cape Town City coach Benni McCarthy and his chairman John Comitis over the purchase of players was given a public airing ...
Sport
2 years ago
Next Article