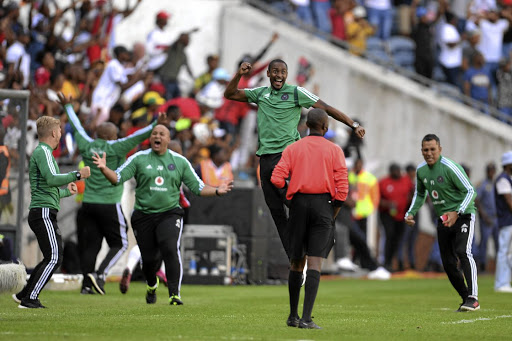 Orlando Pirates coach Rulani Mokwena is reluctant to blame players for their vapid start to the season, insisting it's the technical team who should account for the dreary form.

Having already been eliminated from the CAF Champions League and the MTN8, Pirates have been a shadow of their last season self, with only two wins, two defeats and three draws in the league so far.

Bucs' major undoing has undoubtedly been their defence as they've conceded a whopping 12 goals, with seven of those coming from their last two league outings against Bidvest Wits [4-3 defeat] and Cape Town City [3-3 result], respectively.

Still, Mokwena, pictured feels the blame must not be placed on players, shouldering it alongside his support staff that includes assistant Fadlu Davids.

"I have an absolute belief and confidence in the squad and the team," said Mokwena in the wake of their 3-3 home draw against City at Orlando Stadium at the weekend.

"We've got to do more from our side, technically, to support them because if you look at some of the goals that we concede, you also have to look at our organisational forms and maybe when we were playing too many draws nil, nil ... 1-1, we put a lot more focus on the offensive scheme and offensive patterns."