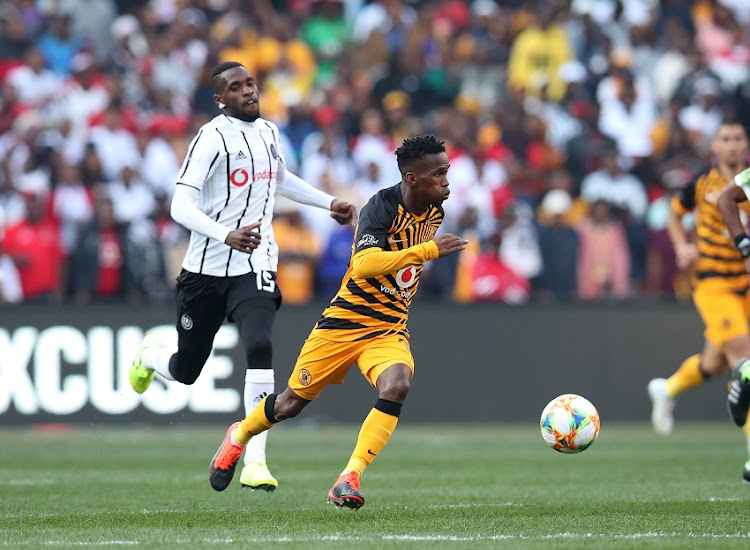 Kabelo Mahlasela of Kaizer Chiefs challenged by Fortune Makaringe of Orlando Pirates during the 2019 Carling Black Label Cup match between Kaizer Chiefs and orlando Pirates at the FNB Stadium, Johannesburg on the 27 July 2019.
Image: ©Muzi Ntombela/BackpagePix

It's early days but Kaizer Chiefs attacking midfielder Kabelo Mahlasela is convinced that they are strong enough to win the league title under coach Ernst Middendorp this season.

AmaKhosi‚ who last won the league title at the end of the 2014/2015 under Stuart Baxter‚ have started the campaign positively and they are currently top of the log on goal difference with 13 points from six matches.

Mahlasela believe that Middendorp's philosophy and meticulous planning will get them over the finish line in May next year.

“I think and believe that we can go all the way and win the league this season because of the philosophy of the coach and the things that we are doing at training‚” he said.

“The coach is forever motivating us‚ he is forever showing us the bigger picture and we know that Chiefs haven’t won any silverware for a number of years‚ but that has to change.

"That is why we have started the season on a high note‚ we know that we have to start delivering and winning football matches.

"We had good pre-season‚ we brought in good players and the philosophy of the coach suits the players that we have.”

AmaKhosi have won four games‚ drawn one and suffered a lone defeat in the six matches they have played since the start of the season in August.

Mahlasela‚ who has fully recovered from a torn meniscus injury that kept him out of action in the closing stages of last season‚ said being on top of the pile shows that they are doing something right.

“Being on top of the log shows that we are doing something right.

"We are winning matches because we are playing good football and we are prepared‚” he said.

The midfielder said that the return to action of goalkeeper Itumeleng Khune‚ who has been out with an injury since December last year‚ is a boost.

“At Chiefs‚ each and every player is important and capable of making things to happen‚" he said.

"Everyone knows their job and the fact that they must deliver at the end of the day. We will push each other to win something this season because it has been long.

“It is important to have Khune back because he is experienced and he has been playing for a long time.

"There is healthy competition at Chiefs because we have Daniel Akpeyi and Bruce Bvuma among the goalkeepers.

"It is good to have most of the players back and fit because we may play two games in a week.

"In that case‚ the coach can chose to play one for this game and the other one for that game.”