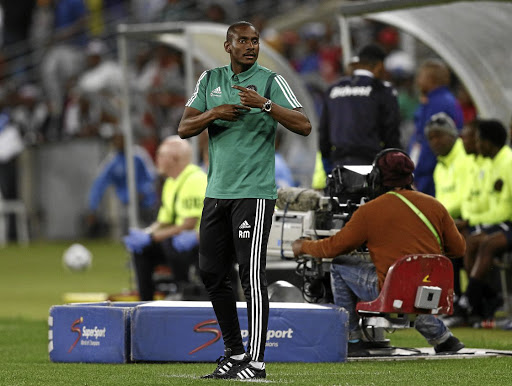 Orlando Pirates interim coach Rulani Mokwena has sounded confident that the club's hierarchy and his players still have faith in him, disregarding his critics.

Since taking over from Milutin Sredojevic last month, Mokwena has endured a rather dreary stint in the hot seat, with the MTN8 and CAF Champions League eliminations his main lowlights.

Speaking after their enthralling 4-3 defeat at the hands of Bidvest Wits at Moses Mabhida Stadium at the weekend, Mokwena suggested he's appreciated internally at Pirates.

"I cannot control people's beliefs. I can't control people's perceptions [referring to his naysayers]," said Mokwena, who's just managed one win in the six matches he's overseen across all tournaments, with four draws and two defeats.

"I focus on trying to be a better coach every single day. The group [players] know that. The club knows how hard I work and that's the only thing that I can control. I am feeling the love."

Bucs have conceded 12 goals in all competitions this season. This has seen their defensive credentials being questioned.

"Before the [recent] Fifa break, we had that challenge of conceding a lot of goals and not scoring. We focused a lot on our offensive schemes, trying to find a little bit more balance and we stabilised things," said Mokwena.

"We we played a 0-0 draw against AmaZulu and kept a clean sheet against Golden Arrows. So it's disappointing we left the flood gates open [at Wits]."

Against Wits, the Sea Robbers struck through Tshegofatso Mabasa, Musa Nyatama and Gabadinho Mhango, while for the Students it was Deon Hotto, Mxolisi Macupu, Cole Alexander and Phathutshedzo Nange who were on target.

"I think if we play like this, nine times out of 10, we'd probably win the match. But it's work in progress. We're integrating a lot of new players. We've changed structure slightly."