Sundowns remain the only unbeaten side as they scrape past Maritzburg 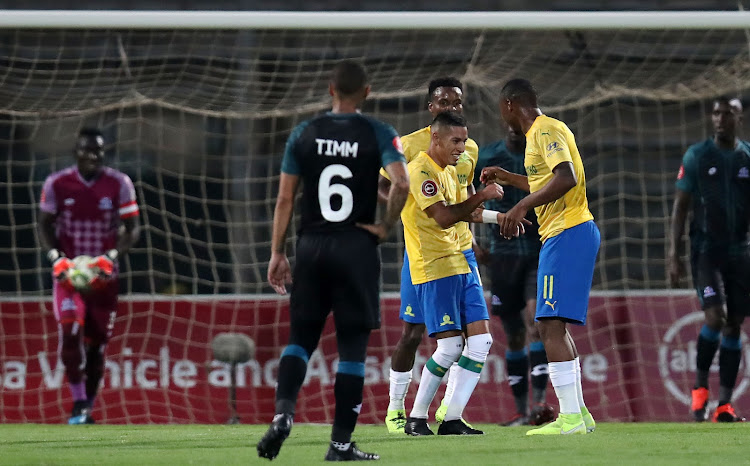 Champions Mamelodi Sundowns returned to winning ways after the disappointment of a cup exit in midweek as they edged Maritzburg United 2-1 at Lucas Moripe Stadium on Saturday but needed a stoppage time winner from Lyle Lakay to take a fortunate three points.

Lakay had barely been on the pitch when he was able to turn and strike a half volley into the roof of the net one minute into stoppage time just when plucky Maritzburg looked as if they were going to go home with a deserved, and most important, away point.

Sundowns led at half-time as Gaston Sirino showed composure to turn inside and fire home from closed range in the 39th minute.

But Maritzburg were back in the game soon into the second half from a corner as captain Siyanda Xulu scored and looked to be going home with a morale boosting draw before conceding at the earth.

“Even if we hadn’t won this game I was happy with the fight and a lot of chances we created,” said a relieved coach Pitso Mosimane afterwards.

“It was much better than Wednesday.”

They had looked flat in going down to SuperSport United in the MTN8 second leg semifinal on Wednesday but with three changes to the line-up from Mosimane they were back to winning ways.

Sundowns are the only unbeaten side left in the league and have a game in hand as they move into second place, setting out an early stall for the rest of the campaign.

Maritzburg remain without a win after five games, which will concern Eric Tinkler given the coaching blood spilt by other Premier Soccer League (PSL) clubs at the start of last week.

Maritzburg would have felt they were in with a chanced after Sundowns’ midweek exertions, or lack thereof, and employed an attacking press as they looked for counter attacking opportunities.

Thabiso Kutumela’s 13th minute shot forced an excellent save out of Denis Onyango as Maritzburg proved Sundowns’ equal in the early exchanges.

The long throw-ins from Phumlani Ntshangase also caused problems in the Sundowns defence with Mosa Lebusa almost kneeing the ball into their own net in panic as he tried to deal with a bouncing ball.

But after 25 minutes, Sundowns wrestled control of the game and chances began to fall, particularly for Jose Ali Meza, making a first league start in more than a year.

Meza had an effort well blocked by Maritzburg ‘keeper Richard Ofori in the 26th minute, another chance in the 37th minute when Ofori almost committed a blunder and again might have scored just before half-time at the end of a long punt out from Onyango.

A double change for Maritzburg at the break offered a route back into the game for the visitors and they were level 10 minutes later as Daniel Morgan’s perfect left-footed corner was met at the back post by Xulu to head home.