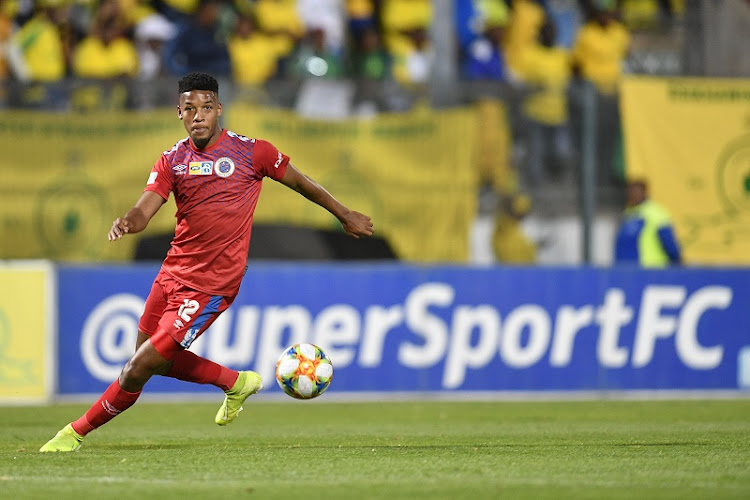 SuperSport United have advanced to their third consecutive MTN8 final after outwitting local rivals Mamelodi Sundowns with a 2-0 win in the semifinal second leg last night.

On aggregate, they stormed into the R8m cup final with a 3-1 result over two legs.

The team is intent to get their affable coach Kaitano Tembo his first title in his second year as the main man in charge.

The win came courtesy of goals from Teboho Mokoena and Jamie Webber with Thamsanqa Gabuza playing a superb cameo where he had a hand in both goals.

Matsatsantsa a Pitori will now face Highlands Park at the Orlando Stadium on October 5 (6pm).

The Lions of the North advanced to the final after beating Polokwane City on penalties at Makhulong Stadium on Tuesday night.

The Brazilians were yearning to get into a final for the first time since 2016 but it was not to be.

Mamelodi Sundowns coach Pitso Mosimane has said that new Spanish director of academy and scouting José Ramón Alexanko will have to prove himself as a ...
Sport
2 years ago

SuperSport clearly came out with a game-plan of getting an early goal and that's exactly what they got.

In a move started in the midfield, Gabuza got the ball inside the box and laid it off to Mokoena who thumped the ball into the net in the 12th minute.

United had a lively start to the game and the players looked intent to upset their affluent neighbours.

Gabuza provided brawn upfront, while his partner Bradley Grobler was the brains of the attack. Their unlikely combination has proven deadly so far this season and the Downs defence had their hands full.

MTN8 cup glory continues to elude Pitso Mosimane after Mamelodi Sundowns were convincingly beaten 2-0 by to SuperSport United in the second leg at ...
Sport
2 years ago

With the sensational Sipho Mbule playing just behind them in support, it made for a lethal triumvirate.

Sundowns had an unusual combination in attack with Ali Meza and Gaston Sirino leading the frontline.

However, due to his poor match fitness, Meza huffed and puffed during the match and was not very effective.

Mokoena marked the influential Themba Zwane out of the game, while Dean Furman ably thwarted any threat from the midfield.

After United got the first goal, Downs threw everything at them and had them pinned back for the remainder of the match.

The danger with that, however, was that they were vulnerable to a counter-attack. And a counter-attack was how the second goal came as Gabuza held up the ball well and passed to Webber who smashed the ball home in the 86th minute.

Mbule, Frosler already many miles ahead
Sport
2 years ago

Kaitano Tembo turns to SuperSport's ‘chickens’ to peck at Sundowns

Keletso Makgalwa has had scans on his Achilles injury but the results had not arrived by Thursday, leaving Mamelodi Sundowns uncertain about how long ...
Sport
2 years ago
Next Article