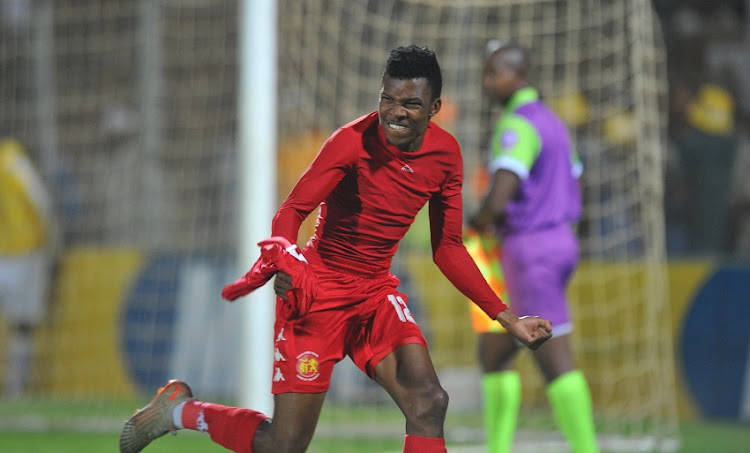 Mokete "Makhokhoba" Mogaila became teary-eyed as he described what was going through his mind when he stepped up to score the winning penalty that sent Highlands Park to their first ever cup final in the Premier Soccer League era.

Mogaila carried the hopes of his team on his diminutive shoulders with aplomb of a seasoned campaigner after he was entrusted with the responsibility of taking the decisive spot kick.

The lightening-quick winger sent man-of-the-match goalkeeper George Chigova the wrong way as Highlands roared to a 4-3 shootout win over Polokwane City in Tembisa on Tuesday evening to book a place in the October 5 final.

“First and foremost I would like to thank God and the technical team for the opportunity to play.

"If it was not for God I would not be able to play‚” said Mogaila.

Tears welled up in Mogaila's eyes as he relived the moment when he sent the Makhulong Stadium crowd into a frenzy with the winning penalty.

But the University of Johannesburg (UJ) final year mathematical sciences student did well to hold back the tears.

“Yeah it was a big stage but like you know if you practice penalties frequently (you will get it right more often than not)‚” said a teary-eyed Mogaila‚ who was battling with his emotions but immediately composed himself.

Mamelodi Sundowns coach Pitso Mosimane says new signing Tokelo Rantie is fit and could be available for selection when the Brazilians host city ...
Sport
2 years ago

Mogaila was playing in the Varsity Cup for UJ last year before he joined Highlands in December.

In September last year‚ the speedy winger was shattered after losing a Varsity Cup semifinal through penalties with UJ.

“Around this time last year (September 2018) I was playing in the Varsity Cup and we lost at the semifinal stage through a penalty shoot-out‚ and I didn’t take a penalty in that defeat‚" he said.

“So I had regrets for the entire year to say ‘maybe I should have taken one for my team and maybe I could have made the difference for my team’.”

With Mohamed Anas having blasted his penalty over the crossbar‚ all Mogaila needed to do was put the ball in the back of the net‚ and he did exactly that under immense pressure.

“So now I could not just stand there and wait to regret again‚" he said.

"I have been practicing penalties every single day and (on Tuesday) I got an opportunity to take one and I had to make sure that I put the team first.

“It is a big achievement for me.

"I mean it is my first appearance of the season today and to be able to help the team to go to the final. I am very grateful for the opportunity.”

Mogaila was introduced for Lindokuhle Mbatha with half an hour remaining and completely changed the complexion of the match with his tear-away runs and crosses.

“The coach told me to go out there and enjoy myself and not to complicate things‚" he said.

"He told me to just to go out there and work for the team and that individually everything will work out fine.”

Mogaila‚ who majors in computer science and applied mathematics at UJ‚ is used to juggling his football skills with his school work.

“For me it is about time and management‚ dedication and determination and hard work. It is not about being a genius or smart‚” said Mogaila on how he gets the balance right.

“You can be smart but if you are not putting a lot of work into it then you won’t achieve the degree.”