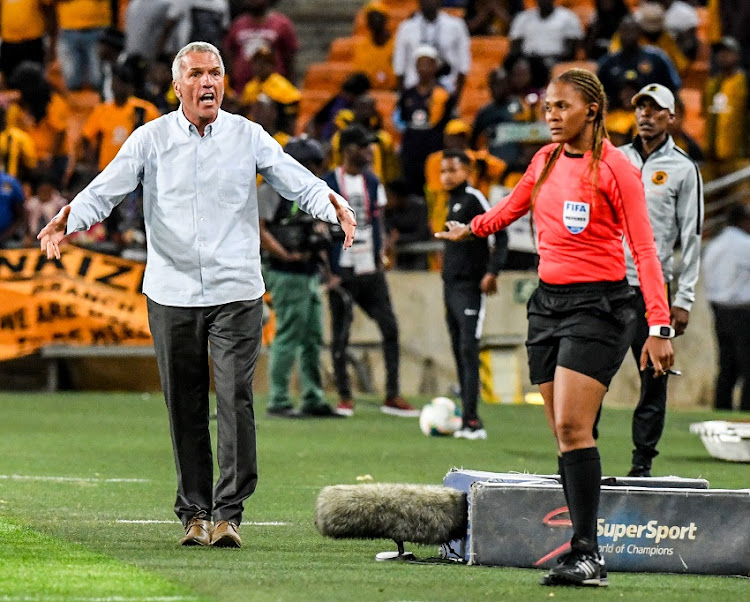 The near three-week break Kaizer Chiefs had from their last match disrupted their momentum‚ Amakhosi coach Ernst Middendorp said after his team suffered their first defeat of the 2019-20 Absa Premiership in 1-0 setback against Polokwane City at FNB Stadium on Saturday evening.

Chiefs lacked flow‚ and were disjointed‚ as a defensive‚ hard-working City profited from Jabu Maluleke’s 16th-minute penalty‚ then were content to sit back and absorb pressure for most of the game.

Amakhosi were unable to provide slickness in their passing in the final third to break the Limpopo visitors down for enough chances to turn the game.

Middendorp said he believes an 18-day break for a Fifa international date and the MTN8 semifinals disrupted Chiefs’ rhythm‚ having been top of the log with three wins and a draw from four games.

He pointed out that Amakhosi were a pale shadow of the team who fought back from a goal down for a stirring 2-1 win against Cape Town City in their previous fixture at Newlands Rugby Stadium on August 27.

“We didn’t really come into the game. It was a bit surprising for me‚” Middendorp said.

“I had some good training sessions over the long break. It looks like that break [was disruptive]‚ if you compare how we finished the period before against Cape Town City.

“In the second half we had opportunities to score – we didn’t take them. I would like to see the replay of the penalty. I don’t think Daniel Akpeyi had a very clear contact.

“In the end‚ we have to accept it. To look into it‚ I think a number of key players’ performances – from what we have seen in Cape Town‚ and the games before that – were not what we expected.”

Middendorp said he had purposefully not raised the issue of the long break in his pre-match interviews as he did not want to put that factor into his players’ minds.

“Of course‚ if you go into it we had a good flair and competitive attitude‚ which you had seen in the team before‚” he said.

“And now you are out of action for more or less three weeks‚ and you try to train. But‚ as everybody knows‚ the last element of performance‚ to be successful‚ you get it through games.

“And OK‚ before the game it’s difficult to give this alibi to a team‚ and I didn’t want to put it in place. But I think you could see‚ we didn’t find the flair we had before when the games were coming every three or four days.”