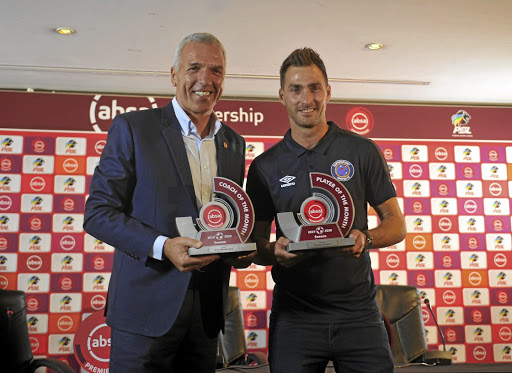 SuperSport United striker Bradley Grobler has revealed that it was not only Orlando Pirates who made an offer for his services but Mamelodi Sundowns also bid for him on the final day of the recent transfer window.

It says a lot about how highly rated Grobler is as Pirates and Downs were eager to sign him despite missing much of last season with a groin injury.

When United made an offer to buy Thamsanqa Gabuza and Kudakwashe Mahachi from Pirates, the Soweto club tried to sneak in a swap deal for Grobler.

But Matsatsantsa a Pitori were resolute and opted to hang onto to the lethal marksman.

"Pirates made an approach to SuperSport and the club was adamant that I was not going anywhere," he said.

"Coach Kaitano [Tembo] asked them not to let me go. As a player I respect and appreciate that."

Kaizer Chiefs coach Ernst Middendorp has warned his charges about the tough challenge of maintaining their position at the top of the log standings ...
Sport
2 years ago

The 31-year-old confirmed to Sowetan that he was also a wanted man at Sundowns.

"There was interest shown by Sundowns in me. I respect Sundowns as a club in terms of what they have done in SA and in Africa," he said.

"They have taken the club to the next level. A lot of credit has to go to coach Pitso Mosimane for turning the club into a giant on the continent."

After his impressive performances so far this season, it's not difficult to see why the clubs wanted to wrestle Grobler away from United.

The Bafana Bafana goal poacher has scored four goals in four league games, which earned him the PSL Player of the Month award for August.

Grobler hopes the award win will be a sign of big things to come.

"I believe I am the first player from SuperSport to win this award, so I hope it's the first of many," Grobler said.

SuperSport and Sundowns share the spoils in MTN8‚ first leg

SuperSport United and Mamelodi Sundowns played to an entertaining 1-1 draw during their MTN8‚ first leg encounter at Lucas Moripe Stadium in ...
Sport
2 years ago
Next Article