Nkareng Matshe | Molefi could prove a low-budget messiah for SA 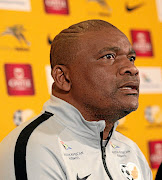 Molefi Ntseki has been elevated to the Bafana Bafana top post probably because he's a cheap option. And that's no insult. There's nothing wrong with exercising financial prudence.

The SA Football Association should long have opted for that criterion to hire coaches. Millions of rands would have been saved and the association would not be on its knees, as is the case now.

The "expensive" options have all brought nothing but shame to the country, failing to turn Bafana into world beaters, while drawing huge salaries.

So Ntseki should walk with pride, should it be suggested to him that he got the job only because the cash-strapped Safa could not afford to get someone else at a higher price.

It's true that Safa is in a financial pickle. Football has not been immune to the rapid economic downturn in the country.

It is thus no surprise that some sponsors have deserted Safa. SA Breweries, which for years has been sponsoring Safa's junior championships, reportedly left last month.

This week we reported that the contract to sponsor all national teams' gear, between the association and global apparel maker Nike, had lapsed.

Added to this gloomy financial situation is the ongoing legal battle between Safa and the Premier Soccer League over the referees' Outsurance sponsorship. Safa accepted the financial backing last year, minuscule and controversial as it was, because it was trying to make ends meet. But now the matter is at arbitration as the PSL feels the desperate Safa is cheapening its billion-rand brand by accepting crumbs masquerading as sponsorship.

Back to Ntseki. There's no question that his salary would not be in the same bracket as that of all his recent predecessors.

And questions about his competence, even though he's spent more than two decades enhancing his CV as a development and junior coach, before ascending to the upper echelons as a Bafana assistant, remain legitimate. There's only one way for Ntseki to prove his credentials. He can use the opportunity afforded to him to show SA did not need high-profile coaches who earned R1.8m per month, after all.

It has been nearly two decades since Bafana qualified outright for a World Cup. Overpaid underachievers have come and gone, all failing dismally to take the nation to the halcyon days of 1998 and 2002.

Hell, we finished bottom of the group in the last qualifying round for 2018, losing four of six qualifiers. What a disgrace!

Ntseki has a glorious chance to show his mettle when qualifying for the 2022 event in Qatar starts soon. His first true test will be in the 2021 Africa Cup of Nations qualifiers against Ghana and Sudan in November, but the ultimate goal should be to get to the World Cup.

Should he miraculously attain that, nobody would be speaking of him as a "cheap option".

He would be feted as a hero, a messiah who ended our years of hurt, proving once and for all that big-name high earners could never be a solution to our problems. It's imperative that he succeeds.