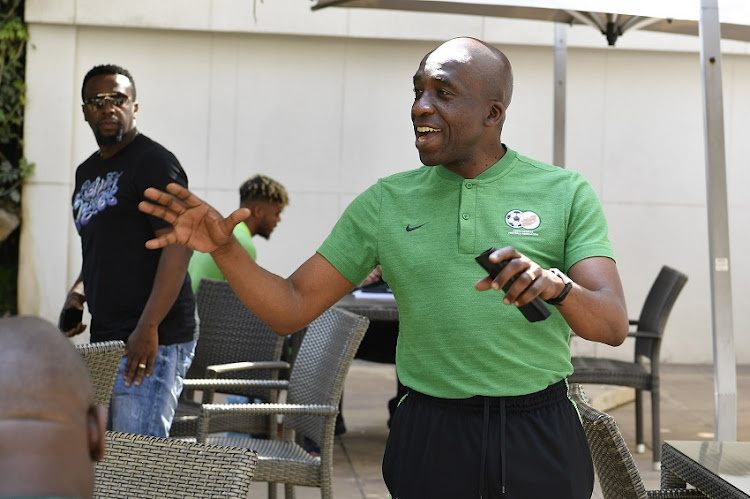 SA under-23 coach David Notoane is rubbing his hands at the thought of synergy among all national teams following the elevation of former under-17 coach Molefi Ntseki to the Bafana Bafana coaching seat.

Notoane applauded the appointment as a recipe for success as Ntseki is familiar with many Bafana and under-23 players after spending a lot of time with them at youth level.

“Look‚ obviously it’s been a process (the appointment of Ntseki)‚” said Notoane.

“When we started with coach Molefi and Stuart Baxter as the Bafana custodians (at the time) and guiding the process to 2022‚ we were continuing with the vision that was started in 2014.

“So with coach Molefi continuing I think it’s a step in the right direction for us.

"Remember he started with a lot of these boys at the under-17 level. So he knows the process and the support and the communication we’ve had so far.”

Notoane's under-23 charges face Zimbabwe in the first leg of a 2020 Tokyo Olympic Games play-off at Orlando Stadium on Friday night after guiding his team to victory against Angola in his first match in charge to reach the second round.

The South Africans must beat Zimbabwe in the two-legged tie to get to the last qualifying hurdle for Tokyo - the eight-nation Olympic tournament to be hosted by Egypt in November 8-22.

The event in Egypt will produce the three African teams to represent the African continent in the 2020 Olympic Games.

Notoane said Ntseki's promotion means a lot to the under-23 players in his team and he added that it was up to them to take advantage of opportunities that could pave a route to Bafana.

“It gives us that confidence and I said to the boys the door is still open because they are the ones who must carry the flag of the country come 2022‚" he said.

"It is them who must take South African football to another level.

“Is that an added advantage or pressure‚ I don’t know?

"But it’s about their dreams and this Olympic qualification process gives them that opportunity to raise their hands‚ to say to coach Molefi ‘we’re getting ready for 2022’."

Notoane has no shortage of players who have donned the Bafana shirt and the likes of Teboho Mokoena‚ Gift Links and Lyle Foster‚ among others‚ should encourage the rest of the 24-men squad to raise their level against Zimbabwe.

“They are those that have already raised their hands‚ like Teboho Mokoena‚” said Notoane.

“They’ve been there already‚ so jah I think things are looking very positive in terms of where the under-23s are and where Bafana are in terms of the synergy we’re looking to create.

“So it’s motivation for this young group of players‚ yes we want to qualify for the Olympics and it’s important.

“But in terms of their bigger dreams as well‚ the door is open.

"So it’s up to them to do whatever it takes to make sure that they get to the Olympics and show the Bafana head coach (Ntseki) that they can compete at the highest level possible.”