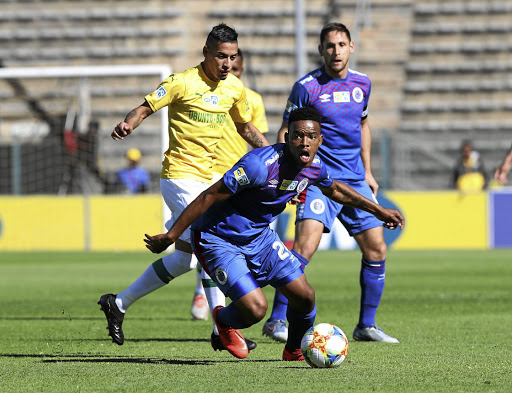 Mbule, 21, has shown some flashes of brilliance in the new season, featuring in all six of Matsatsantsa's games across all tournaments thus far.

His creativity in the middle of the park has made SuperSport's transitional play look slick. Mbule has started four games, coming as a second-half substitute twice.

The lad from Bethlehem, in the Free State, scooped the Man of the Match accolade in their 3-0 win over Bidvest Wits in the MTN8 quarterfinals three weeks ago.

However, with no goal or an assist to show for his bright start to the campaign, Tembo feels Mbule still needs to improve and contribute more, especially his goal and assist return.

"There's still a lot of work to be done with him [Mbule]. He needs to be a little bit more of an effective player," said Tembo of Mbule in the wake of their 1-1 home stalemate to Mamelodi Sundowns in the first leg of the Wafa Wafa semifinals at Lucas Moripe Stadium over the weekend.

"When we speak about effective players, he needs to start scoring, start creating because when we're playing two number 10s, those are more attacking players ... they need to chip in with the goals, him and Tebza [Teboho Mokoena]."

SuperSport and Sundowns share the spoils in MTN8‚ first leg

SuperSport United and Mamelodi Sundowns played to an entertaining 1-1 draw during their MTN8‚ first leg encounter at Lucas Moripe Stadium in ...
Sport
2 years ago

While Tembo is relatively pleased with Mbule's headway, the Matsatsantsa tactician has warned the budding midfielder that he'll be relegated to the bench if his form drops.

"He needs to continue working hard. If he slacks, he'll find himself on the bench. But I am happy with the progress he's made. He just needs to stay humble and keep working."

Conceding at home to provincial foes Downs has put SuperSport on the back foot heading into the second leg of this MTN8 tie, scheduled for September 18 at the same venue. Nevertheless, Tembo remained optimistic: "1-1, we knew it was not going to finish today, there's always the second leg. It's not over; we still have a big opportunity of going to the final."