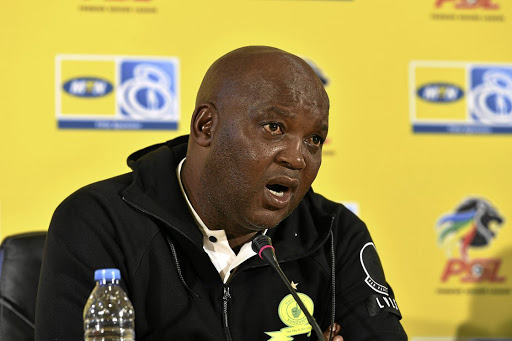 Pitso Mosimane has ruled himself out of the Bafana Bafana job, with the Mamelodi Sundowns coach vowing that he won't allow his fate to again lie in the hands of a "taxi owner, a priest and traditional chief".

The South African Football Association (Safa) is on the hunt for a coach to take over the reins at Bafana. The Safa technical committee is set to present a short-list of candidates to possibly become the new coach tomorrow.

Mosimane was Bafana coach from 2010 to 2012 before being unceremoniously axed from the position.

A delegation led by then Safa vice-president Chief Mwelo Nonkonyana and ex-chief executive Robin Petersen, who is a known priest, arrived at the Royal Marang Hotel in North West on a Monday evening to sack him. He then drove to his Johannesburg home in the wee hours.

At the time, Safa were also represented by Fanyana Sibanyoni, understood to be involved in the taxi industry.

Mosimane on Bafana job: 'It was sad to be fired by a taxi owner and a traditional chief'

Pitso Mosimane does not want to put his fate in the hands of South African Football Association (Safa) officials again‚ the Mamelodi Sundowns coach ...
Sport
1 year ago

Mosimane opened up about the painful experience of being fired.

"What was not nice was the way it happened when I was sacked. I don't believe a coach who works two years and loses two games should be fired," Mosimane said.

"It was sad to be fired by a taxi owner, a priest and a traditional chief. Do I want to face that again? My fate is in those people's hands? Really, it's not good for football. I work hard and put a lot of energy in football, and to have my fate in the hands of those people..."

Mosimane said he pleaded with the head honchos at the association not to sack him.

"I even begged them. I begged them not to fire me. I told them I have a lot to offer, I know what I'm doing."

The 2016 CAF Coach of the Year lamented the fact that South African football is run by people who know little about football.

"Those people are the ones who decide who to hire and fire. Do they understand?" he asked. "They don't understand. I mean, what do they do Monday to Friday to decide football matters? They don't even have the ability; it's sad."

A local coach is set to be appointed to the helm. With Mosimane unlikely to take the job, it may be given to Benni McCarthy, Gavin Hunt or Steve Komphela.

The South African Football Association's (Safa) technical committee members are expected to present a shortlist of candidates to be considered for ...
Sport
1 year ago

On the hunt for a new Bafana Bafana coach

Local expected to take over hot seat
Sport
1 year ago

Benni would be a perfect Bafana fit

We are living on a global stage and there's absolutely nothing wrong about enlisting the services of an international coach for Bafana Bafana. ...
Opinion
1 year ago
Next Article