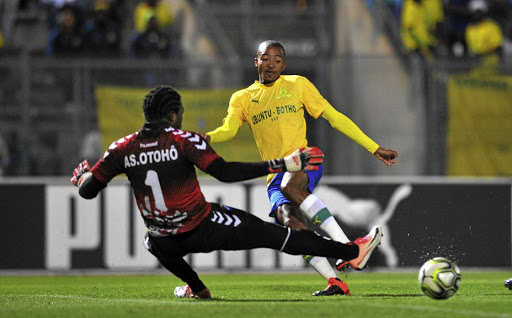 Thapelo Morena of Mamelodi Sundowns is challenged by Wolfrigon Ngobo of AS Otoho during last weekend's CAF match where Morena picked up a groin strain.
Image: Sydney Mahlangu/ BackpagePix

Mamelodi Sundowns winger Thapelo Morena is in a race against time as an injury once again threatens to ruin his call-up to Bafana Bafana.

Morena was selected by coach Molefi Ntseki in the 23-man squad to play Zambia in a friendly in Lusaka on September 7. However, the 26-year-old picked up a groin injury at the weekend during the CAF Champions League clash against Otoho d'Oyo.

It would not be the first time Morena is forced to withdraw from a national team call-up.

Last November, he missed Bafana's back-to-back clash against Seychelles in the Africa Cup of Nations qualifiers with a thigh injury. He has not received a call-up since then but now injury could upset him again.

"I have been working hard with the faith that my time with Bafana will come," Morena said. "Last year I was very disappointed after I missed the Bafana call-up due to injury. I am just crossing fingers that everything will go well and I can recover in time."

The industrious player has been unfortunate to be overlooked on numerous occasions for the national team.

For most parts of the first half, Mamelodi Sundowns picked apart this modest Otoho d’Oyo side from Congo Brazzaville with precision and ruthlessness ...
Sport
2 years ago

Morena has five Bafana caps to his name and the last time he played for the national team was in 2016 in the Nelson Mandela Challenge against Egypt.

The former Bloemfontein Celtic ace has had a difficult year after losing his father James in February.

He told Sowetan in an earlier interview that he would love to play for Bafana in honour of his late dad and mother, who passed away in 2007.

"I was very close to my father and he supported me in my career. It is because of him and my mother that I became a professional footballer," Morena said. "I know he wouldn't want me to look down and crumble after his death. My goal is to play for the national team and to see myself playing overseas."

With the Bafana Bafana camp starting on Monday, it remains to be seen if Morena will recover in time.