Orlando Pirates remain adrift at sea following a sixth match without a win being held 0-0 by Lamontville Golden Arrows in Wednesday night's Absa Premiership match-up at Orlando Stadium in Soweto.

The Buccaneer ship's captain, coach Milutin Sredojevic, jumped ship and now, stuck in the doldrums, first mate Rulani Mokwena - the caretaker-coach who has not won in four games - seems not quite to know where the next breeze will come from to fill the sails.

It is fine to pick horses and systems for courses and opposition. But to switch dramatically from match to match you need a team fine-tuned to perfection to snap into such alterations.

Mokwena has not had the time yet to achieve that level of cohesion.

So keeping things simple, gradually replacing Sredojevic's philosophy with his own, would seem advisable.

Image: Gallo Images Rulani Mokwena is desperate to steer the Sea Robbers out of the troubled waters.

It seemed the classic learner driver's mistake - overcorrecting. The car sways marginally to one side, so the steering wheel is whipped to the other, and the sway across in that direction is even greater.

An experienced coach like Sredojevic seemed to make the mistake in his two years of too many changes.

If a rookie - however promising they may be - takes those changes to a greater extent, it seems to be courting trouble.

Add two players - Fortune Makaringe at left wingback and Augustine Mulenga on the left wing - played out of position, and it seemed no wonder Bucs looked a bit all over the place, and flat.

Bucs were matched against a vibrant young team with an experienced, canny coach in Steve Komphela, but a side you would still normally expect Pirates to boss at home.

They created just two chances in the first half, though one did rock the woodwork.

It was the Durban team who got the first opportunity, though, clever Malawian striker Knox Mutizwa floating in a cross that centreback Nkosinathi Sibisi ghosted onto alone, skying the header. 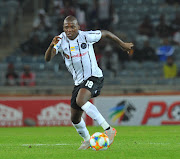 Image: Sydney Mahlangu/ BackpagePix Kabelo Dlamini was hauled off in the second half but otherwise had a decent day at the office.

With five minutes to the break Maela got up high to Mhango's corner and headed onto the crossbar.

In the second half, Bucs' rigor mortis stiffened. They created a half-chance when Lorch, on for Dlamini from the break, had a shot that saw an appeal for handball.

Arrows had the more convincing opportunity, as Nduduzo Sibiya's chip had to be tipped over at full stretch by Wayne Sandilands.

Pirates substitute Austin Muwowo's late free-kick was touched past the post by Sibanda.