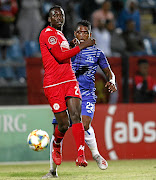 Highlands Park defender Limbikani Mzava is still feeling hard done by his agent after failing to secure him a European move.

Mzava has disclosed how he came close to joining a European club before ending up at Highlands Park.

The defender from Malawi implied his agent, whom he refused to name, was a major factor the move never materialised.

"I had an option to go overseas, but it did not happen ... you know this thing of working with agents.

"I had many offers from Europe; I cannot mention the names of the clubs but they are from Turkey and Holland . I was supposed to go [there]," Mzava told Sowetan.

"Most of the clubs wanted to sign me upon the expiration of my [Golden] Arrows contract, it eventually happened that I am a free agent but that's where I say this thing of working with agents is not helping at times."

According to Transfermarket website, Mzava is represented by LME Football Agency, owned by Mertkan Öndel.

The agency also has the likes of SuperSport United's Evans Rusike and Thabo Rakhale of Chippa United, among others.

Nevertheless, Mzava hasn't thrown in the towel yet on an overseas switch.

The 25-year-old centre-back aims to use this season with Highlands as a stepping stone to his dream move.

"I am still looking forward to playing overseas and I am hoping that it will happen in future, especially if I do well at Highlands. I want to work extra hard this season and maybe by next season I can finally get a move to Europe . the door is still open.''

Having limped off the field in their 1-0 MTN8 first round win over Orlando Pirates almost a fortnight ago, Mzava missed Highlands' 1-1 league draw away to Black Leopards over the weekend.

However, the towering defender is expected to return to action when the Lions of the North host AmaZulu at Makhulong Stadium in a league fixture tonight (7.30pm).