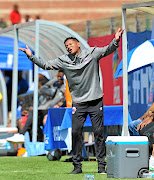 Fresh from putting an end to his illustrious career as a player, Daine Klate appears to be finding his feet as Chippa United MultiChoice Diski Challenge (MDC) coach.

Having just hung up his boots in July, the 34-year-old Klate, who won six league titles (three with SuperSport United, two at Orlando Pirates and one with Bidvest Wits), has had a dream start to his coaching chapter, winning two of his three opening matches at the helm of the Chilli Boys reserves.

"It's been refreshing; I have been enjoying it [coaching]. I am trying to learn as much as I can, as quick as I can,'' said Klate after his troops annihilated Cape Town City 3-0 at Makhulong Stadium at the weekend.

"But it's a big process, I am still busy with my [Uefa] B coaching licence tasks, I am submitting them as we speak. So obviously, I still have a lot of work to do in terms of learning about coaching.''

Under the stewardship of Klate, Chippa have netted an impressive seven goals in three matches.

They lost 2-1 to Stellenbosch in the opener last month, before redeeming themselves to thump Maritzburg United 3-0 two weeks ago.

"We are growing in leaps and bounds, players are starting to get good chemistry among themselves and the camaraderie is good. It's just for us to remain grounded,'' said the Chilli Boys reserves mentor, who also assists first team coach Clinton Larsen.

Chippa turned a laughing stock last season when they were humiliated 10-0 by Kaizer Chiefs, but Klate's arrival seems to have rejuvenated the Port Elizabeth-based side.

"It's only three games into the season, we still have 27 games to play, but yeah, it looks positive at this stage,'' noted Klate.

Klate's charges next face AmaZulu at the Nelson Mandela Bay Stadium on Saturday.