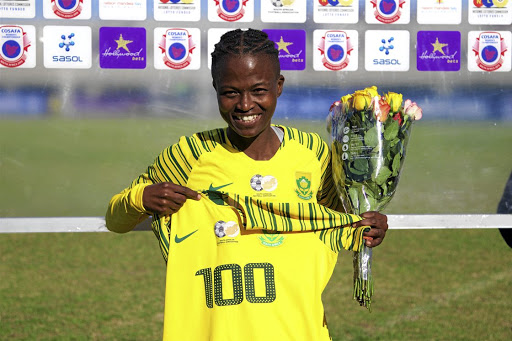 Not only is Makhabane joining other women to honour the 20,000 brave women who led a march to the Union Buildings against the apartheid government's Pass laws, she has also reached her 100th cap for the senior women's national team.

Nicknamed "Jabu", she's delighted to have reached the milestone during Women's Month.

"It's a cherry on top and representing my country is just a great feeling. I feel blessed and privileged," she said. "It's not been an easy journey," reflected Makhabane in an interview with the Sowetan.

This rings true considering her struggles with injuries along the way. She missed the 2012 London Olympics because of a groin injury, but she's a tough cookie. Ask the boys who grew up playing with her in her birthplace of Kutloanong in the Free State.

"I also played with the girls [Kutloanong Ladies] and I was selected by coach Joseph Mkhonza in 2004. So I went to the High Performance Centre [in Pretoria] and I started playing for the U20 national team that year," she said.

The National Women’s League kicks off this weekend in Soweto but there is no clarity on prize money for the champions and monthly grants.
Sport
1 year ago

The following year, Makhabane was already playing for Banyana but it took 14 years for her to reach 100 caps, owing to injuries.

Makhabane made her debut in the 9-0 win over Zimbabwe in 2005 at the Isaac Steyn Stadium in the Vaal under the late Styles Phumo.

"It's an unforgettable match, because I scored a hat trick. I was the Diski Queen of the Match," she reminisced.

Interestingly, her 50th Banyana appearance was also at Isaac Steyn Stadium in June 2014 in a match against Botswana.

She has been an aviation officer at OR Tambo International Airport for 10 years. Makhabane has managed to juggle her job and serve the nation for the past decade.

The eldest in a family of three, Makhabane's career path has been a success thanks to her parents' backing.

Coach Desiree Ellis says the hunger and desire shown by the Banyana Banyana players to claim a hat-trick of Cosafa Women’s Championship trophies ...
Sport
1 year ago

"My parents have always been supportive, especially my dad because he would buy me boots when mom wasn't working," she said.

Makhabane will go down as one of the women who helped Banyana qualify for their first ever Fifa Women's World Cup this year. She was part of the group that was knocked out in the group stage during the tournament played in France two months ago.

The JVW FC midfielder plans to continue her contribution to the country.

"I'm inspired by women like SisRia [Ledwaba - SA Football Association's first woman vice-president]. The lady has been in football for so many years. Even today, she's still a part of the football family and it just shows how strong she is, because being a woman in soccer is not an easy thing."

Makhabane is even more encouraged by the fact that a women's professional league has now been launched in the country, paving the way to identify even more talent for the benefit of the women's national teams.

"We even have so many players overseas. It shows that we have the talent. women's football is growing every day."