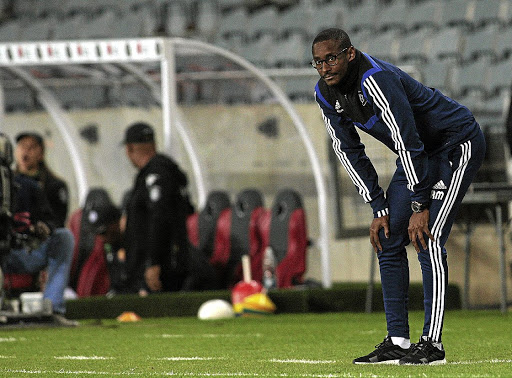 Orlando Pirates head coach Rulani Mokwena is the fourth-generation member of the Sono family at the Soweto giants. / Veli Nhlapo

Mokwena assumed the reins at Bucs last Friday after the sudden departure of Milutin "Micho" Sredojevic.

The 34-year-old Mokwena belongs to a royal bloodline in local football that goes back four generations. His rise to head coach at Pirates marked a completion of a family dynasty. His grandfather Eric "Scara" Sono captained Pirates in the 1960s while his uncle, the iconic Jomo Sono, turned out for the club in the 1970s. His father (KK), pictured, turned out for Bucs in the 1980s.

"My son called me last week. We call each other Mr Sono. He said, 'Mr Sono, I am the coach of Orlando Pirates Football Club.'

"I was very happy, my heart was content but I said to him, 'no problem my son, [but] you are telling the wrong person. The person you must tell is at the grave site (referring to his grandfather Eric)."

Sono plans to take his son to his father's grave in Orlando East to receive his blessings. After all, this was the first place Sono took his son to when he decided to follow a career in the game.

"When Rulani told me he wanted to work in football, I first took him to my father's grave site and now that he's a coach, he must go back," Sono said. "That's where he must get his blessings."

Mokwena is the wizkid of South African football and has been touted by Mamelodi Sundowns coach Pitso Mosimane and Golden Arrows coach Steve Komphela as the next best thing in the local game.

However, the former Sundowns assistant coach is clearly still adjusting to his new role.

This is evident from the two games he has been in charge at Bucs. The team lost 1-0 to Highlands Park in the MTN8 at the weekend and played to a goalless draw with AmaZulu in Absa Premiership on Tuesday.

Highlands Park coach Owen da Gama is convinced that Orlando Pirates counterpart Rulani Mokwena is ready to step up to the plate and assume the ...
Sport
2 years ago

Orlando Pirates were pretty, snappy and entertaining in the first half, but increasingly on the back foot in the second in their 0-0 Absa Premiership ...
Sport
2 years ago

Tactical whizkid Rulani Mokwena finds pleasure in being Orlando Pirates' head coach, despite the pressure he assumed when taking over the club's hot seat.

Many would buckle under the immense responsibility of taking charge of such a prestigious club at the age of 34.

The elevation makes him the youngest ever coach to be in charge of the club. Ironically, former coach Milutin Sredojevic held the previous distinction of being the youngest Bucs coach in his first stint back in 2006 when he was only 36.

"The last couple of days have been exciting. I am enjoying the responsibility of leading a club I sleep, breathe and eat. A club I was born into," Mokwena said.

"If you cut my [veins] you will see I bleed black and white. When I left Sundowns people said I made the wrong decision. Today I sit in a situation where I lead my grandfather's, uncle's and father's club.

"I am honoured and privileged to be given such a responsibility by one of the most humble, loyal and hard-working human beings which is the chairman [Irvin Khoza]."

He believes his promotion to the helm at the Sea Robbers is more than just about football.

"If we succeed in leadership positions as young black coaches, we inspire young black boys to become leaders in business, politics or wherever, because these are the people who have showed it can be done."