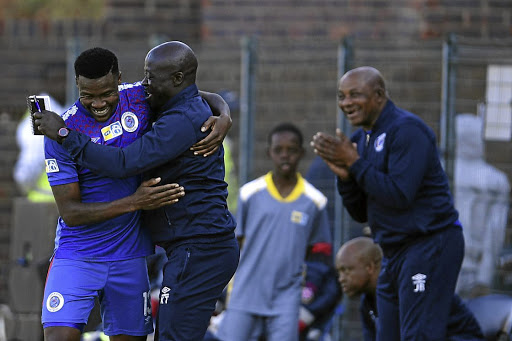 SuperSport United striker Thamsanqa Gabuza feels the playing system of his new team and his style are a match made in heaven.

The powerful striker opened his scoring account for United on Sunday where he bagged a brace as they powered to a 3-0 win over Bidvest Wits in the MTN8 first round. Gabuza joined the team from Orlando Pirates where he was a polarising figure. "I am very happy to score. I don't even remember the last time I scored a goal before this," he said.

The 32-year-old last scored in Pirates' 2-1 win over Free State Stars in May 2018. "I am happy with the way SuperSport plays and it suits my strength. The system here will allow me to score goals because I am in the box."

United strikers have been firing from all cylinders with goals coming aplenty. In the previous match, Bradley Grobler scored a brace in the 3-0 win over Pirates in the league last week.

Gabuza implied that at the Buccaneers they did not utilise him to his best abilities. "There is a lot of differences because Pirates play a lot of short passes and here it's not like that, we play diagonal balls.

"Most of my goals from the national team [Bafana Bafana], Golden Arrows and Pirates have been headers. That is what I am used to . and as a striker I must always be in the box to finish."

Despite his blistering start to life at the three-time Premiership winners, he has pleaded with the public to give him more time to adjust.

"It's because I am at a new home. If I don't score I must at least create. But it is only my first season, so I need more time," Gabuza said.