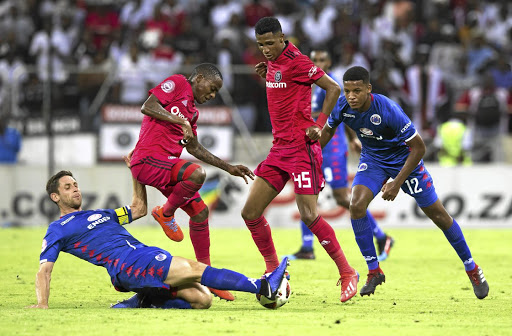 If Orlando Pirates are to stand a good chance of winning the Absa Premiership this term, they will have to get some monkeys off their back.

Three years ago, the Buccaneers were hammered 6-1 by Matsatsantsa at Mbombela Stadium. It's not been easy for Pirates to get a win against the Tshwane side.

In fact, SuperSport won 1-0 at the same venue in February.

The defeat was one of the reasons Pirates were denied the 2018/19 league title in the end, as they were pipped by Mamelodi Sundowns for a second season running.

The challenge for Pirates this season is also to beat their hoodoo sides such as SuperSport. The two sides meet at Mbombela tonight (7.30pm) and admittedly, it's still early days in the race, but it's vital to collect points at any stage.

SuperSport United striker Thamsanqa Gabuza is rubbing his hands in anticipation of his first match against his former teammates at Orlando Pirates.
Sport
2 years ago

Pirates would hope that winger Thembinkosi Lorch will be in fine form, but Bucs have to watch out for their former striker, Thamsanqa Gabuza, who will no doubt have a point to prove against his former employers.

Mamelodi Sundowns, meanwhile, will also be in action against Chippa United at Nelson Mandela Bay Stadium, also at 7.30pm.

It was popularised used by Real Madrid when the Spanish giants won their 10th European Champions League in the 2013-14 season.

For coach Pitso Mosimane and his "Brazilians", they would be hoping to continue their good away form even this season. Sundowns have had the best away record in the last four seasons.

Chippa, however, are well aware that they can't afford to lose any matches at home, considering they almost got relegated last term.

In Limpopo, there's also an interesting match between Polokwane City, who have won two of their matches so far and this time they come up against another title chaser Bidvest Wits at Old Peter Mokaba Stadium. Kicks off at 7.30pm.

Orlando Pirates will overturn their 1-0 deficit in the second leg of their CAF Champions League clash with Zambian side Green Eagles‚ coach Micho ...
Sport
2 years ago
Next Article