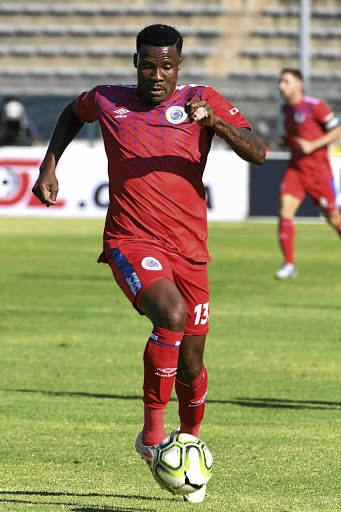 SuperSport United striker Thamsanqa Gabuza is rubbing his hands in anticipation of his first match against his former teammates at Orlando Pirates.

Gabuza made the switch from the Buccaneers to the Tshwane club during the current transfer window.

Now the Soweto club will take on Matsatsantsa-a-Pitori at the Mbombela Stadium tomorrow (7.30pm).

Gabuza will be on the opposite side for the first time after spending six years with the Sea Robbers.

All eyes on the Tshwane derby

Downs aim for 10, as SuperSport plan to close gap
Sport
2 years ago

"There is no point that I will be trying to prove. I just have to follow the coach's instructions and do what I am supposed to do."

The 32-year-old was a polarising figure at Pirates that resulted in a love-hate relationship with the supporters.

He said it was only after a conversation with Pirates boss Irvin Khoza that he made the move to Matsatsantsa.

"The chairman [Khoza] asked me if I would be fine coming to SuperSport United and I responded by telling him that I will only leave if he gives me his blessings," said Gabuza.

"There were more than five teams that were interested in my services but SuperSport wanted me more."

"I would like to score more goals here at this club," he said.

It is now more than a decade since SuperSport United won the first of three back-to-back titles‚ the only club to have ever achieved that in South ...
Sport
2 years ago

Sowetan picks the favourites for the PSL 2019/2020 league title, as well as those that may struggle. By Tiyani wa ka Mabasa and Sihle Ndebele
Sport
2 years ago
Next Article