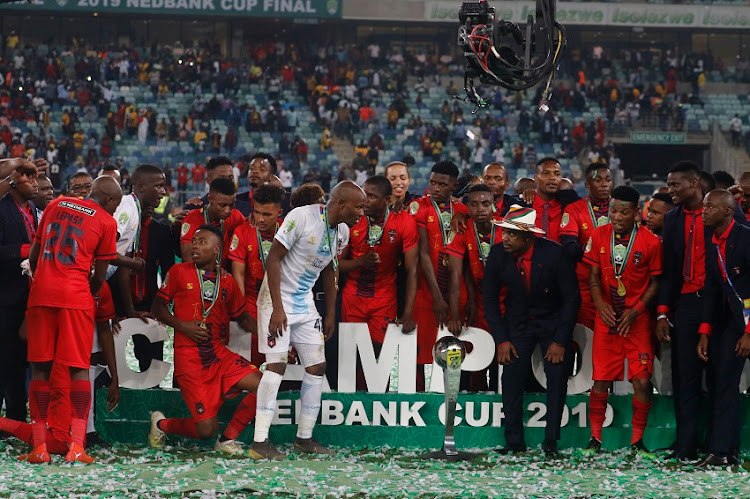 Lower tier side TS Galaxy are taking their participation in the Caf Confederation Cup seriously and have no intention of following the example of the top-flight sides that often treat the competition as an inconvenience.

Galaxy qualified for the continental competition against all odds after beating the more illustrious Kaizer Chiefs 1-0 to win the Nedbank Cup at Moses Mabhida Stadium in May.

They start their campaign with a preliminary clash against St. Louis of Seychelles at Mbombela Stadium on Sunday where they will be looking for a positive start.

While taking part in continental competitions is usually costly and some SA clubs have cited this as one of the reasons behind their reluctance to participate‚ Galaxy chairman Tim Sukazi was unfazed.

“We take all the three competitions that we will be playing in very seriously and that includes the Caf Confederation Cup‚” he said.

“Our preparations have gone well and we have put ourselves in an unthinkable situation.

Sukazi added that playing in the Confederation Cup comes with huge costs but they are learning valuable lessons that will benefit them in the future.

“Participating in Caf is extremely costly for any club‚ especially for a young club in the First Division without a sponsor‚" he said.

"It is extremely costly but we have to find a way of making ends meet.

“We are in discussions with the Mbombela municipality and they are willing to help us in every possible way.

"The Department of Sports in Mpumalanga may come to the party to support this team.

"This will be for the first time a Mpumalanga club plays an official Caf match in the province and we are looking forward to that.”

Though they are excited at the journey into the unknown‚ Sukazi said their preparations were a shock to the system.

“Everything is a shock to the system because of a vast number of issues that we must comply with‚" he said.

"It is simple matters like paying travelling expenses for match officials which comes at a huge cost.

"You get match officials from the Comoros and if you take them more than 200 kilometers outside the main port of entry‚ and you have to take care of their travelling expenses.

"It is an interesting journey and a big learning curve for us.

"We are allowing ourselves the opportunity to learn so that one day when we graduate to the PSL‚ we are ready because we would have learned.”