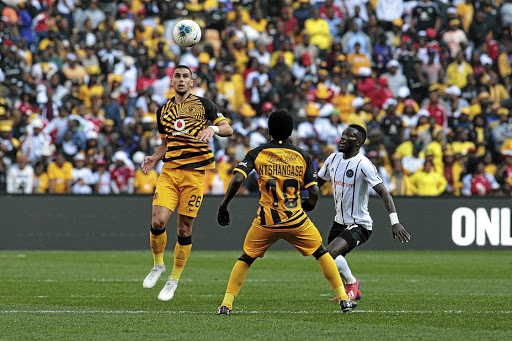 Kaizer Chiefs' defender Lorenzo Gordinho has explained how the club intend to source motivation from their four barren seasons.

"It's heavy, it's very heavy [to have gone four seasons without silverware]," Gordinho said at the club's media-open day in Naturena yesterday.

"But during the off-season we worked on that aspect mentally; to understand that it's a heavy pressure, but it doesn't need to be one that weighs us down on the field. It must be one that gives us more fire, more spirit to win."

The 25-year-old said Amakhosi were recovering from their dark days, having embarrassingly lost the Nedbank Cup final to second-tier outfit TS Galaxy in May.

Kaizer Chiefs might be on a quest to reclaim their former glory but Jabu Mahlangu is not convinced and has boldly predicted that his erstwhile side ...
Sport
2 years ago

"When I came back before the end of the season [from a loan spell at Bloemfontein Celtic], a lot was going on here at the village. Things were not going well, especially after we lost that Nedbank Cup final," said Gordinho.

"But once we came back from the off-season, the mentality has changed a lot. We've become stronger, we've become a unit. We understand what we did wrong last season and how we can rectify that."

Having opened their league campaign with a hard-fought 3-2 victory at Highlands Park on Sunday, the Amakhosi centre-back has vowed they will be among the title contenders.

"It's possible, it's a new league, new season... we are all starting at zero. What happened last season is gone. A lot of things have happened, I think it's going to be a good season for us," said Gordinho.

"Everyone wants to fight, every game and every minute. Even at training we are fighting for positions and that has changed a lot, that's why we were able to carry on fighting and get the result against Highlands."

Ernst Middendorp has praised his frontline players as Kaizer Chiefs got their season off to a winning start and said Amakhosi will look to play more ...
Sport
2 years ago

Cape Town’s legion of Kaizer Chiefs fans must brace themselves for the fact that this month’s meeting between Cape Town City and the AmaKhosi is ...
Sport
2 years ago
Next Article