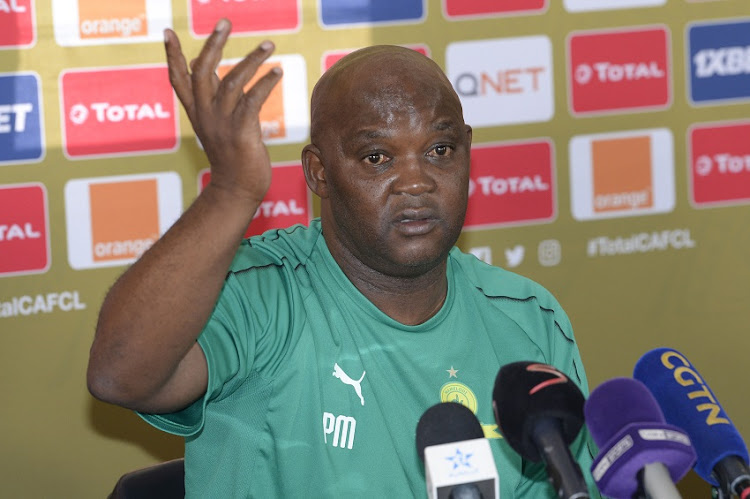 Mamelodi Sundowns coach Pitso Mosimane is unfazed by the Confederation of African Football's decision to fixture the pedigreed South African side side against little-known AS Otoho D’Oyo of Congo-Brazzaville in the preliminaries of the Champions League on Sunday.

Sundowns finished fourth in the Champions League last season after a defeat to Wydad Casablanca in the semifinals and Caf's decision to play the Brazilians in the early stages of this year's competition has raised eyebrows.

But Mosimane wasn't bothered and preferred to get on with it.

“Caf does not have a consistency policy in that regard‚ in the Uefa Champions League you know where you are and what do to‚” said Mosimane in his trademark nonchalant manner.

“Last year was different to this year.

"This year they said they are taking the three teams that played in last year’s semifinals.

"The other time we didn’t play the preliminaries‚ but it would be nice if there is a clear format like in the local top eight competition.

"At least you are in the Champions League‚ so go and play because you have a chance to win.”

Sundowns are chartering a plane on Thursday to take them into the heart of the Congo where they meet Otoho d’Oyo in the first leg of their first round tie as the new competition gets underway this weekend.

The domestic league champions will leave late on Thursday and Mosimane said they have watched numerous videos of their opponents.

“You have to select the personnel that is suited and capable of dealing with them‚ they are like AS Togo Port‚ Lobi Stars or AC Leopards who are difficult to be beat‚" he said.

"You do what you have to do to survive‚ but we have been there for five years and we can win away.

“We must be smart‚ they are a powerful team and they went to the group stages of the Confederations Cup last season where they played against Raja Casablanca.

"They are big boys‚ you must ready for set-pieces and they have wingers with pace.

"They are a typical Caf Champions League team.

“Conditions are not that favourbale because the pitch is not that flat.

"When you start complaining about the pitch‚ travelling distance‚ hotels and mosquitoes‚ you have lost the match.

"You are in the Champions League my friend‚ just get on with it and make sure that you don’t lose or get a draw with a goal because 1-1 is better than 0-0.”

Mosimane also said he doesn’t understand why some of the local teams don’t want to take continental football serious.

“I don’t understand when teams say we are not interested in continental competitions‚" he said.

"So‚ basically you are just domestic and that’s it.

"It’s like you as a journalist‚ you want to write international stories.

"You can’t be writing only about what is happening at home when there is an opportunity for an international story like this one of us going to Congo‚ you get on it.

"I don’t get it when people say we don’t care about that‚ sorry.

"Playing on the continent helps because when we go to Congo or Zambia I know which stadium we are going to play and you have an idea of the culture or the mentality.

"That is why South Africa beat Egypt because Sundowns can beat some of the big teams in Egypt.”