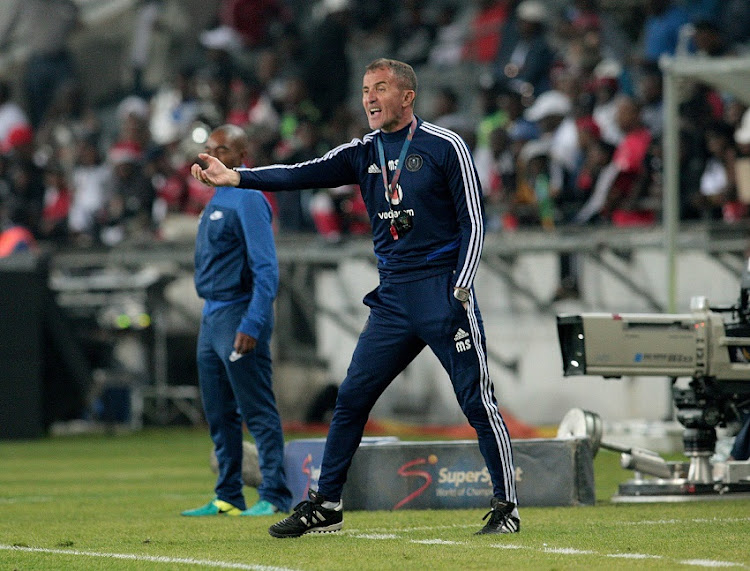 Orlando Pirates coach Milutin Sredojovic wants to make Orlando Stadium “a fortress” this season‚ he said after his team opened their 2019-20 Absa Premiership campaign with an impressively forceful 3-1 win against Bloemfontein Celtic.

Bucs paid for slow starts to the season in their past two campaigns as they ended runners-up in both to Mamelodi Sundowns.

They clearly want to banish especially last season’s slow start‚ where a high number of draws at Orlando Stadium that they could not convert into wins in the opening half of the season played a role in Bucs ending with 12 stalemate results in 2018-19.

On Saturday night‚ after a lukewarm first half‚ Pirates were on the front foot against Celtic in the second. Sredojevic was happy that the victory left plenty of room for improvement.

“We had an off-season where we have strengthened the team‚ planned for the season and had a preseason that lasted for six weeks with nine friendly matches and one Carling Cup‚” Sredojevic said afterwards.

“So it was very important that all the work and investment as players‚ and us as a technical team‚ paid back with a performance and a result.

“A result is something that we are happy with. The performance is still very far from being on top competitive shape and form.

The coach admitted Bucs wanted a win as part of wanting to banish a slow start at Orlando such as last season’s.

“It is an issue that is very important in our mathematics and deep analysis that we did from last season. So many draws that we played at home‚” he said.

“And this was also exactly the shortcoming‚ and not that ball from Craig Martin for the header of Thato Mokeke when we drew with Cape Town City [away in Pirates’ second-last game last season].

“If we had won our home games we would have been safe and dry‚ and would have reached the amount of points that we were looking for. This season we want Orlando Stadium to be a fortress.

“I want to use the opportunity‚ personally‚ to say that in one of the hardest coaching jobs in Africa‚ that it was exactly two years back – 730 days‚ or 48 months – that our chairman brought me to be coach here.

“With these great players who we have‚ and a technical team including Rulani Mokwena and Fadlu Davids‚ we are looking to make Orlando Stadium a fortress.

“Not forgetting our spiritual owners‚ the supporters‚ who today were really a player No 12.

“We want it to become really an unpleasant place to come to‚ where we can try to get three points as many times as possible.”

Pirates’ goals against Celtic were scored by Augustine Mulenga in the sixth minute‚ Innocent Maela in the 56th and substitute Gabadinho Mhango in the 78th. Mzwandile Mahashe had equalised for Celtic in 39th.