Banyana cruise into the semis of the Cosafa Women’s Championship 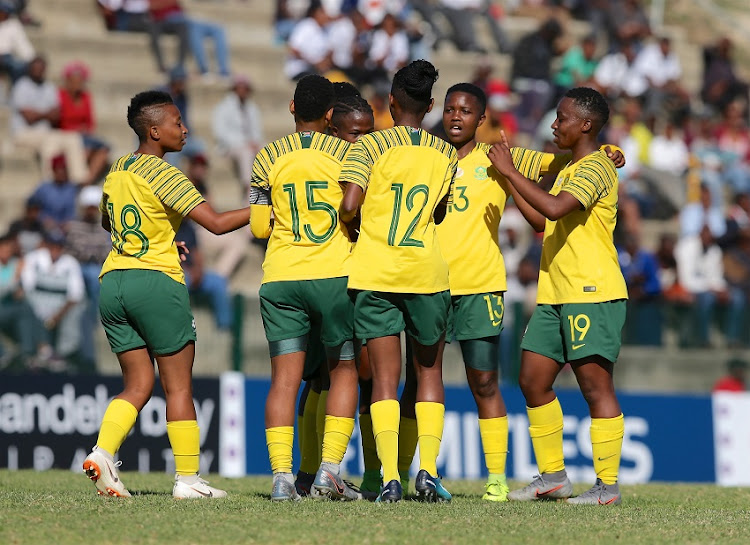 Banyana Banyana cruised into the semifinals of the 2019 COSAFA Women’s Championship after a 3-0 victory over Madagascar in their final Group A clash at the Wolfson Stadium in Nelson Mandela Bay on Monday.

Banyana made it three wins from three thanks to strikes from Ode Fulutudilu and Refoloe Jane‚ and an own goal from Madagascar defender Lalaina Razafimanantsoa.

South Africa top their pool‚ but must wait until later on Monday to find out their semifinals opponents as they take on the winners of Group C on Wednesday‚ which is likely to be Zimbabwe‚ though the Mighty Warriors must still seal their place.

The team scored a massive 23 goals in the pool stages and conceded only once as they seek to make it a hat-trick of regional titles after victories in 2017 and 2018.

Banyana coach Des Ellis made six changes to her team‚ which included a 100th cap for midfielder Mamello Makhabane‚ reaching the milestone some 14 year after she made her debut.

Van Wyk sat out the game‚ and will miss the remainder of the tournament‚ with a knee injury sustained in the victory over Malawi last time out.

Banyana took an early lead when Congolese-born forward Fulutudilu rifled the ball into the roof of the net after nine minutes‚ reward for their early dominance.

Fullback Lebo Ramalepe came close when her intended cross drifted towards goal and came back off the crossbar‚ with Madagascar able to scramble the ball to safety.

Jane added a superb second with an athletic bicycle-kick from 12 yards as she showed her quality again to leave Malagasy goalkeeper Verosantatra Andrianandrasana with no chance.

Makhabane should have added a third to cap her milestone‚ but headed over from close range when it seemed easier to score.

Shange Sthembile and Priscilla Pesa were introduced in the second half to make their international debuts as Ellis continues to grow the depth of her squad.

Banyana scored their third when Makhabane’s well-struck free-kick was deflected into her own net by Razafimanantsoa.

Meanwhile‚ South Africa also made it three wins from three in the inaugural COSAFA Women’s Under-20 Championship that is also being played in Nelson Mandela Bay.

Basetsana had already sealed their semifinal place before their clash with Mozambique‚ but still ran out 3-1 winners.

Oratile Mokwena‚ Shakeerah Jacobs and Zethembiso Vilakazi found the back of the net as Simphiwe Dludlu’s side march on confidently in the competition.