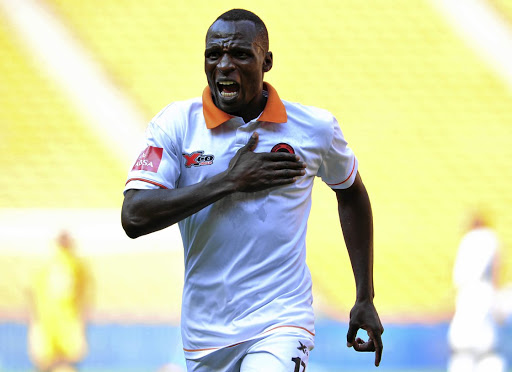 Rodney Ramagalela has not set himself a target for the number of goals he wants to score for his new club, Highlands Park, this season.

The 30-year-old former Polokwane City marksman has not kicked a ball in anger since January but the Highlands newcomer has said that he is more than ready ahead of their Absa Premiership opening match on Sunday.

Ramagalela is expected to be unleashed on Kaizer Chiefs as Amakhosi visit Makhulong Stadium in Tembisa for a confrontation with the Lions of the North (kickoff 3pm).

“In terms of training I think we have prepared well and we are in good shape and everyone is looking forward to the match,” Ramagalela said.

“I hope we will do our best to make sure that we get a result and hopefully win the match on Sunday.”

Ramagalela revealed in February that he was “depressed and embarrassed” after his former club, Polokwane City, froze him out of the team for refusing to sign a contract extension.

He signed a pre-contract with Highlands instead and was later suspended and ordered to train on his own away from the rest of his teammates.

So, having endured so much over the past six months, what is Ramagalela’s state of mind?

“For me, having not played since January, I think it is the mental strength that I will rely on,” the striker said.

“For me as a senior player to go through this game I think I am more than ready.

“The fact that I have not played for long, I want to do more and make sure that I contribute to the success of Highlands Park.

“My main priority is Highlands Park. If Highlands Park wins then I also win. As longs as the team is winning I am happy. Whoever scores will celebrate together as teammates.

“I don’t’ want to say I will score so many number of goals. It’s not about how many goals you have scored but it is about how many matches has the team won.

“If you score 20 goals and the team gets relegated then your goals pale into irrelevance.”

Ramagalela and his teammates would have watched Chiefs play against Orlando Pirates in the season-opening Carling Black Label Cup friendly last weekend to identify areas they can use to hurt their opponents in defence.

“Look, for us, I think we have focused more on ourselves than them,” Ramagalela said.

“I think if we stick to our plans and apply what we have been doing in training, I think we are going to stand a chance against them. Yes, they are a big team and we have to respect them, but, look, we have to do our job.”

The match at the 10,000-seater Makhulong Stadium was sold out on Wednesday.