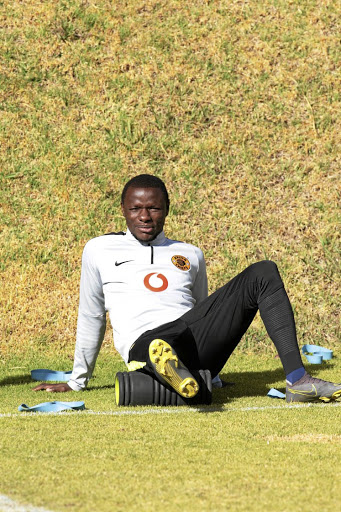 New Kaizer Chiefs forward Lazarous Kambole has explained why he chose Amakhosi over a number of other big guns who were interested in him.

Orlando Pirates and various north African sides such as Moroccan powerhouse Raja Casablanca were some of the giants believed to be after the signature of Kambole, before the Zambian forward joined Chiefs.

"It was not an easy journey [to join Chiefs] for me because I received a lot of offers from different teams, but football is not just football, football is business. So Kaizer Chiefs was the right choice for me,'' Kambole reasoned.

"To begin with, it was the rich history [that made him come to Naturena] and of course Kaizer Chiefs is a big club in Africa ... a big brand.

"The past four years they haven't won anything, so I needed a new challenge, not just an ordinary challenge, but a difficult challenge.''

While revealing he's been in touch with erstwhile Chiefs ace Collins Mbesuma, who's also his countryman, Kambole is not obsessed about emulating the man who netted 35 goals in the 2004/05 term in all tournaments, emphasising he wants to create his own legacy at Naturena.

"I talked with Mbesuma before I came here, to hear what must I expect. But I am not looking forward to beat his records. I am here to do my own thing, to score goals, assist and win trophies for this club and of course write my own history," Kambole said.

The 30-year-old front-man is in Chiefs' Carling Black Label Cup XI to face traditional enemies Orlando Pirates at FNB Stadium on Saturday (3pm). The ex-Zesco United man has declared war, promising the relationship he has with his Pirates compatriots Justin Shonga and Augustine Mulenga will count for nothing on Saturday.

"Pirates play good football and it won't be easy on Saturday against them.

"It's going to be war. We are going to give it our all on the pitch,'' noted Kambole.

"They (Shonga and Mulenga) are my brothers, but on the pitch there's nothing like brothers, so it's going to be war.''