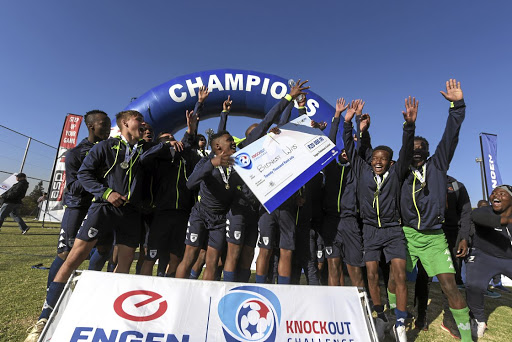 Gauteng soccer fans witnessed an array of exceptional talent during the 2019 Engen Knockout Challenge at Wits Marks Park over the weekend, with hosts Bidvest Wits successfully defending their title after beating Black Aces 2-0 in the final.

A goal in each half was enough to secure the Students the title for the second successive year, with their coach Caesar Maphalla applauding their pre-tournament preparations.

"We earmarked the Engen Knockout Challenge as the tournament to measure the progress and quality of our squad," commented Maphalla. "We increased the intensity both physically and mentally to ensure that our team was fully prepared to do well here."

Maphalla said the club considers the Engen Knockout Challenge to be the most prestigious youth tournament, because it brings together the top 16 teams in this region.

"As you know, our PSL coach is a believer in promoting young talent and it's up to the youth coaches at Bidvest Wits to prepare the players for him as the Engen Knockout Challenge provides a platform for these players to earn their place in our senior teams," said Maphalla.

As regional champions, Wits will join Chippa United (Eastern Cape), AmaZulu (KwaZulu-Natal) and Moroka Hostel (Bloemfontein) in qualifying for the 2019 Engen Champ of Champs to be played later this year.