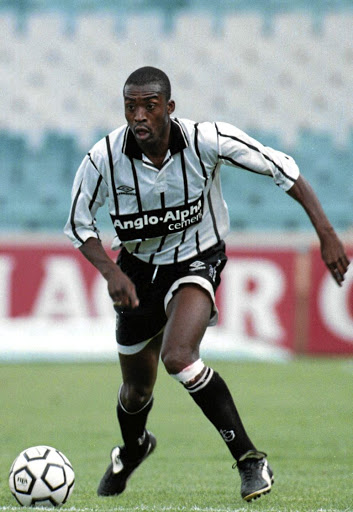 The new Orlando Pirates kit which is identical to the one the Buccaneers wore during their historic CAF Champions League triumph in 1995, will revitalise the current class.

This is the view of the ever-entertaining Bucs legend Edward "Magents" Motale, who played a key role in the club's Champions League glory of 1995. This remains the club's only continental triumph.

"This jersey is beautiful. It will bring that spark ... if you put it on, you feel strong. I have high hopes that the team will win many trophies with this jersey," the humorous Motale said at the jersey launch at Orlando Stadium yesterday.

"This is a winning jersey, we want no excuses this season. We are tired of being runners-up. We are going for the kill. The cabinet is empty and the boys [players] know what must be done this season."

The Soweto heavyweights have gone five straight seasons without a trophy, with the 2014 Nedbank Cup their last piece of silverware. In the past two seasons, Pirates finished second to Mamelodi Sundowns in the league.

Pirates have played a number of pre-season games against the likes of Cape Town City and NFD sides TS Galaxy and TS Sporting. Bucs managed a draw against City, while beating the second-tier outfits from Mpumalanga province.

They will be hoping to stretch their pre-season unbeaten run when they face traditional foes Kaizer Chiefs in the sold-out Carling Black Label Cup clash at FNB Stadium on Saturday (3pm).

It's in the same fixture where the Sea Robbers will use their new jersey for the first time. The Buccaneers will then open their league campaign against Bloemfontein Celtic at Orlando Stadium the following Saturday.

The last time Orlando Pirates wore a white home jersey with black stripes, they brought the country to its feet by being twice crowned kings of ...
Sport
2 years ago
Next Article