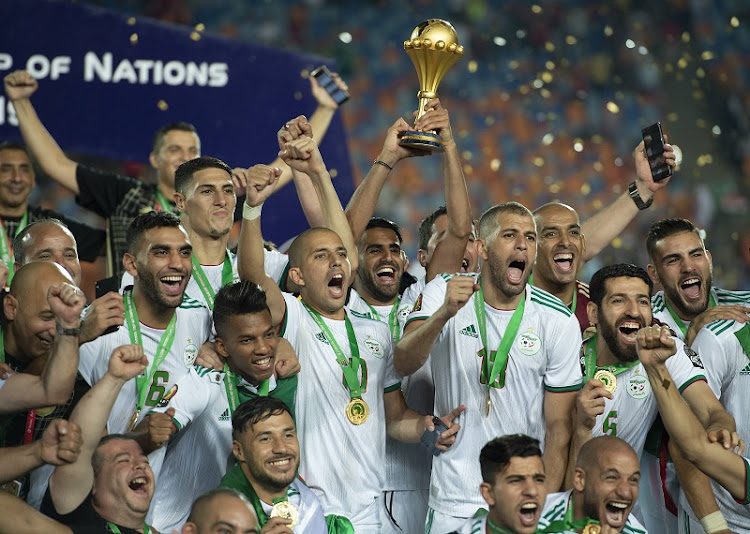 Algeria captain Riyad Mahrez lifts the trophy as his team celebrate winning the 2019 Africa Cup of Nations Final against Senegal at the Cairo International Stadium on July 19, 2019 in Cairo, Egypt.
Image: Visionhaus/Getty Images

Played in the searing heat of the Egyptian summer, against a backdrop of chaos in the regional governing body CAF and enlarged to an unwieldy 24 teams, this year's Africa Cup of Nations defied logic and, on the pitch at least, turned into a surprising success.

In terms of drama on the field and football quality, the tournament was a step up on previous editions and, encouragingly, two teams led by young African coaches reached Friday’s final with Algeria beating Senegal 1-0.

Although the final itself was a disappointment, the knockout stages were packed with drama.

South Africa knocked out hosts Egypt and then lost out to a last minute goal in the quarter-final against Nigeria who themselves were sunk by a Riyad Mahrez free kick deep into stoppage time in their semi-final against Algeria.

Senegal and Tunisia both missed penalties in their semi-final before Tunisia scored a bizarre own goal and then had another penalty revoked by VAR.

Algeria won the Africa Cup of Nations for the second time on Friday when a fortuitous second-minute goal gave them a 1-0 win over Senegal in the ...
Sport
2 years ago

There were tears as Algeria forward Baghdad Bounedjah – scorer of the only goal in the final - wept inconsolably on the bench after missing a second-half penalty and being taken off in the quarter-final against Ivory Coast.

There was also romance as Madagascar, a country which midfielder Anicet Andrianantenaina said was only famous because of the film which takes its name, reached the last eight on their debut at the finals while outsiders Benin also got to the last eight - despite not winning a game in regular time.

The move away from the traditional January-February slot, following years of complaints from European clubs, to late June appeared to work in the tournament's favour, even if it was by accident rather than design.

An earlier start had been planned but it was moved back to allow players to rest after the Muslim holy month of Ramadan.

That meant the players arrived for the tournament reasonably fresh, having had time to recover from the European season, and also that, when the final took place, it was the only competitive soccer of note being played and did not have to compete for attention.

The downside is that European-based players will have a lot of catching up to do when they return to their clubs who began pre-season training several weeks ago.

More countries are trawling their diaspora around the globe for potential players, such as Madagascar who drafted in footballers from the lower divisions of the French league.

Some teams showed the kind of stability not usually associated with African football, with Nigeria and Senegal retaining the services of coaches Gernot Rohr and Aliou Cisse respectively even though the countries were eliminated following the group stage at last year's World Cup.

Egypt brought the curtain down on the 2019 Africa Cup of Nations with a closing ceremony that preceded the final between Senegal and Algeria.
Sport
2 years ago

Cisse has now been in charge of Senegal for four years, almost unprecedented in African football, and it has paid off handsomely with the Lions of Terange returning to the World Cup after a 16-year absence and ending a 17-year wait to reach their second AFCON final.

"This is the fruit of a long time preparation," said Cisse after his side reached the final. "Those players worked hard for five full years and now we get the fruit of this hard work”.

Facilities, including stadiums, were generally regarded as first class, especially pitches - not always the case in Africa.

"We have good pitches and this one for me is the most important thing," said Nigeria's Rohr. "You can play good football on these wonderful pitches in Egypt, everywhere, and even the training pitches."

"I've been to many AFCON finals and this is probably the best in terms of facilities," he said.

Unfortunately fans often found it difficult to get into those facilities because of a complex online-based ticketing system which many said was plagued by glitches and Byzantine security restrictions.

The media also suffered with journalists often given conflicting instructions by security officials who were standing next to each other.

One holder of a VIP ticket told Reuters his bus was subjected to five security searches on its way to the stadium for the final.

This, added to the traditional travelling difficulties, resulted in most games played in near empty stadiums - an age old problem that still has not been addressed.

"It is a trend that is causing concern," said Bwalya. "We have to do more to sell tickets."

Irate Bafana Bafana coach Stuart Baxter lashed out at the media after he was asked for an explanation for the national team's performance at the ...
Sport
2 years ago

Each player expected to pocket R520k.
Sport
2 years ago
Next Article